Showcase your own levels here. Make sure to provide the level ID, a description and at least one screenshot
Post Reply
5 posts • Page 1 of 1

Hey friends! I made my own fangame-in-the-game, Rockman 2 Uber! It is based on the romhacks of Rockman 2 (Megaman 2's Japanese version; and I live in Japan). However, is it new? No! I decided to post the RM2U levels here as a celebration of many months have passed and I finally did Metalman's stage! There are 4 stages developed for now. The Intro Stage, Bubbleman's stage, Airman's stage, and Metalman's stage. 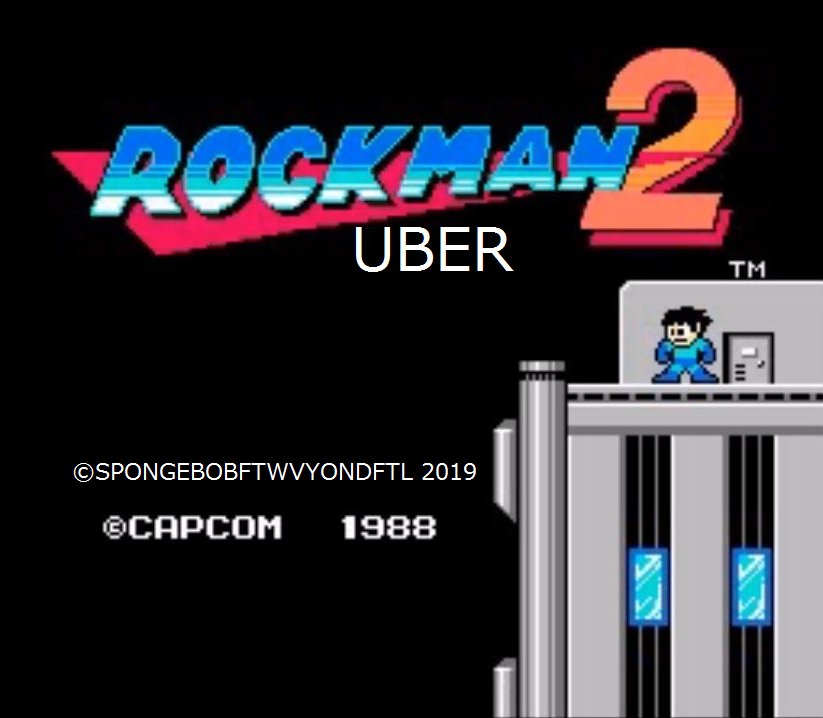 STORY: This game takes place 2 months after the infamous fangame Megaman Rock Force, or as I like to call it, Rockman Mega Force. Wily was tought lost, but he RETURNED! He recruited the first 8 Robot Masters he made (the ones from Rockman 2) and used a mythical artifact to steal some of Rockman's powers, such as the ability to slide, charge the Buster, and Double Gear System. This way, Rockman has to stop his nemesis ONCE AGAIN and save the world!

There are no E-tanks, or should I say, E-cans, anywhere this time, and you must play the Intro Stage first! After that you have to go to any of the robot Master stages. Not all of them are done yet. In fact, the Robot Masters will have different weaknesses like in many other hacks, as Rockman 2 Uber is based on Japanese Rockman 2 hacks, which tend to change the Robot Master weaknesses. I also think I'll wait for 1.6 before releasing the other stages. All levels will have Neo Metalls (Neo Met), as well as ladders and spikes. Also, levels will not be posted here immediately. You will have to wait and be very patient.
Last edited by SpongebobFTWVyondFTL on Sat Oct 26, 2019 10:08 pm, edited 4 times in total.
Rockman rocks so hard!!! AND SO DOES SPONGEBOB.
I was too lazy to continue ROCKMAN 2 UBER that I had to cancel it. I made 4 of its stages in 1.5.5.1: viewtopic.php?f=13&t=9419

There are Shotmen at the first part of the stage. Shoot 'em down! 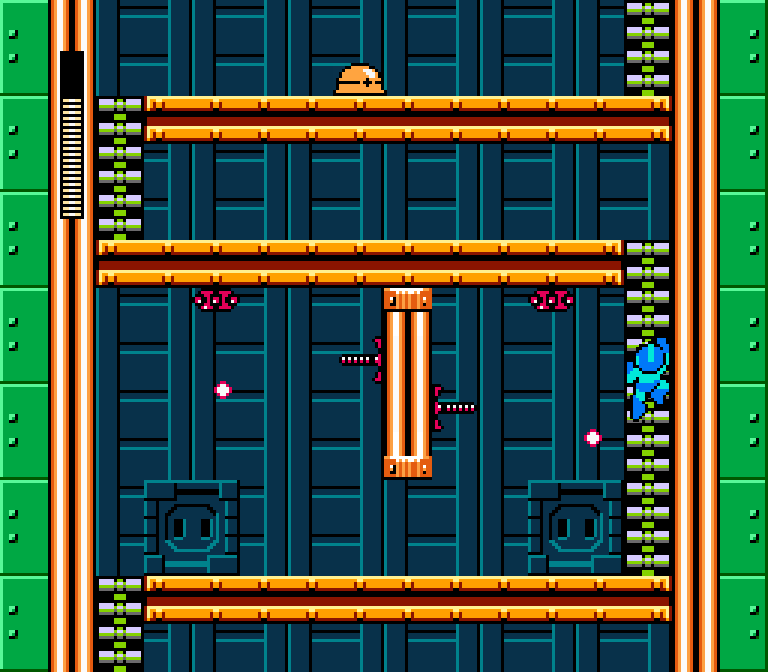 Climb the ladders while avoiding Screw Dirvers and Blasters. 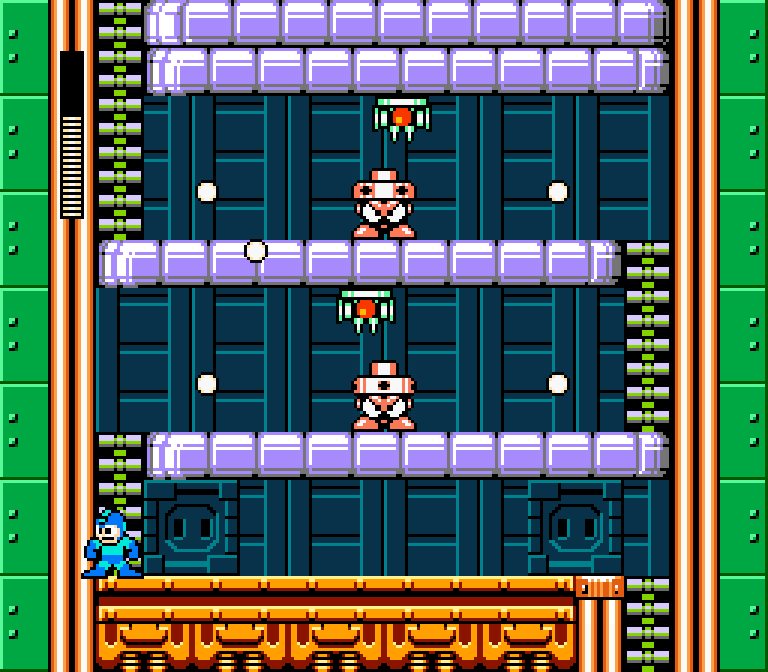 OI! Just like their normal counterparts, New Shotmen are here as well! Avoid 'em while you climb the ladders! 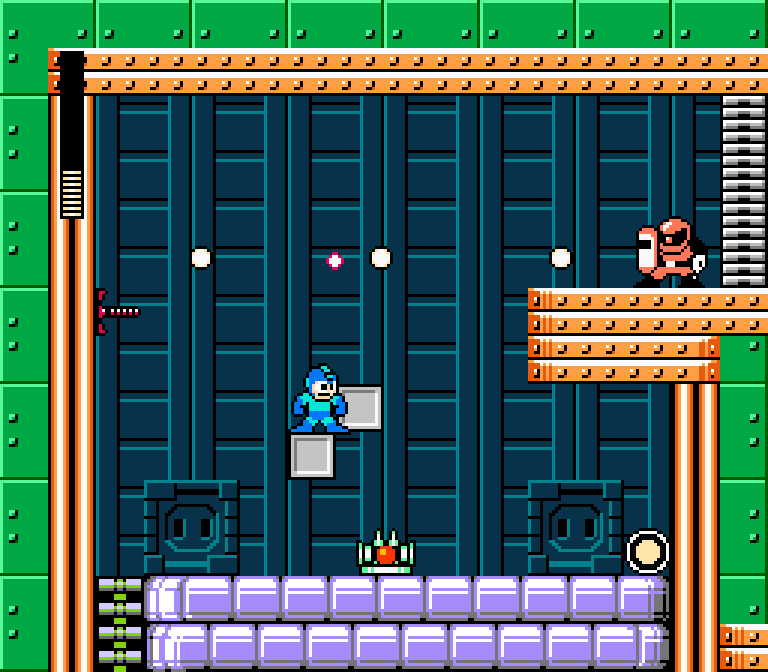 Make your way on the Disappearing Block stairway while taking down enemies. 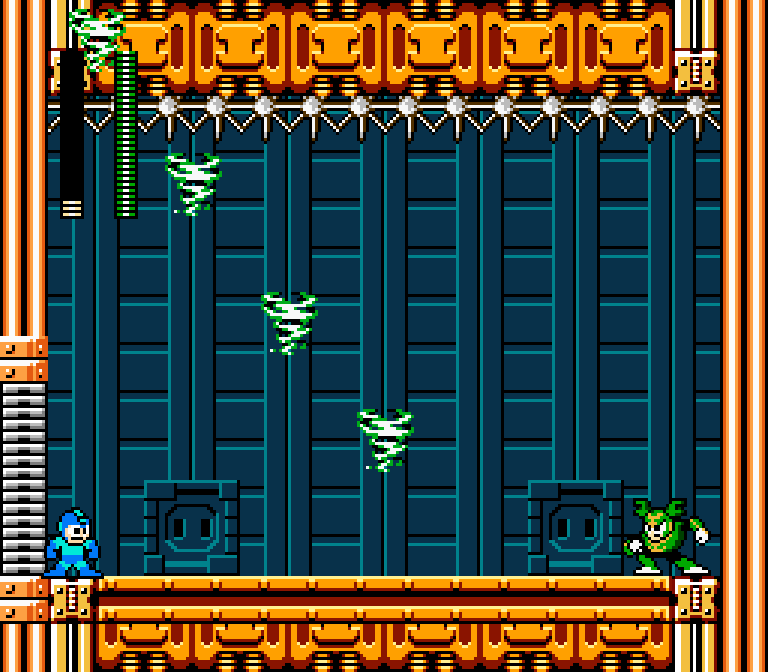 Aaand the Mega Force member is Tornadoman! Shoot him down but don't let him take you to the spiked ceilling!

Next we have Bubbleman's stage. There is a weapon select room in all of the Robot Master stages. You must choose the weapons! They are the same as those from Rockman 2, and each Robot Master is weak to a specific weapon. Anyways, Bubbleman occupies an ice base located in... *gets hit by bowling ball* FINLAND!!! No, seriously, Bubbleman's stage in Rockman 2 Uber is actually located on Finland. Anyways, it is full of ice, and you may slip! You also have to be very wary on a specific section later on the stage... which consists of a blindjump area! But I know you'll make it. And by the way, Time Stopper is depicted as Flash Stopper and Bubble Lead is depicted as Wind Storm.
LIST OF ENEMIES: Kouker Q, Kerog (Croaker), Neo Metall (Neo Met), Okosutobon, Tanishi (Crabbot), Shrink, Penpen EV, Surumaker, Gabgyo, Blaster (Beak), Crystal Joe, Crazy Razy, Hoohoo, Icicle Teck, Au Au, Squidon-MINIBOSS, SRU-21/P.
LIST OF LEVEL OBJECTS: Falling Platform
SCREENSHOTS: 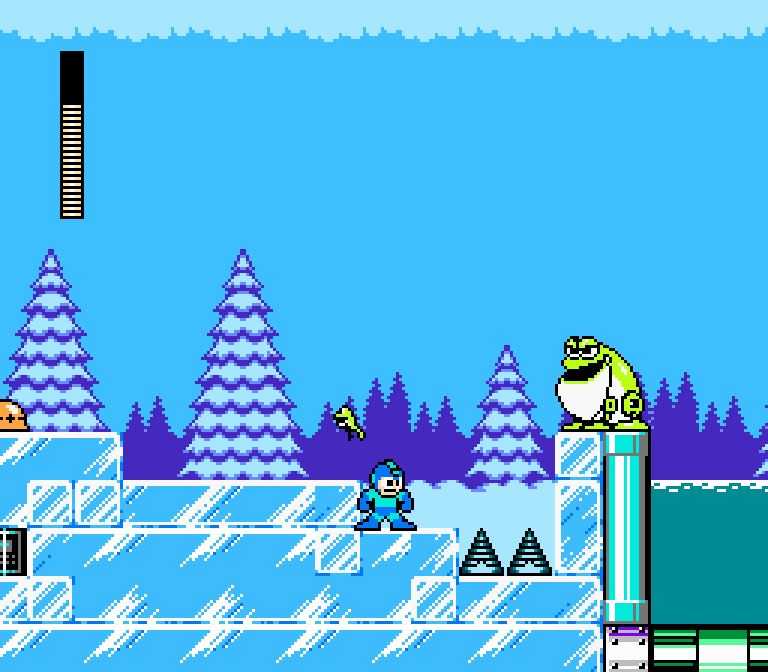 The stage's premise is quite simple. Take down enemies without slipping or falling into spikes. 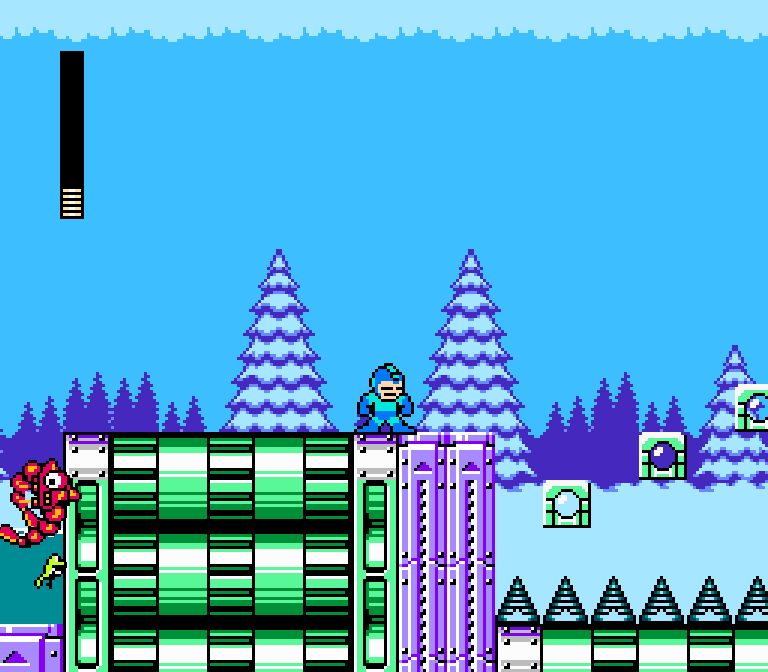 FALLING PLATFORMS! Just like the original, so you know the drill! 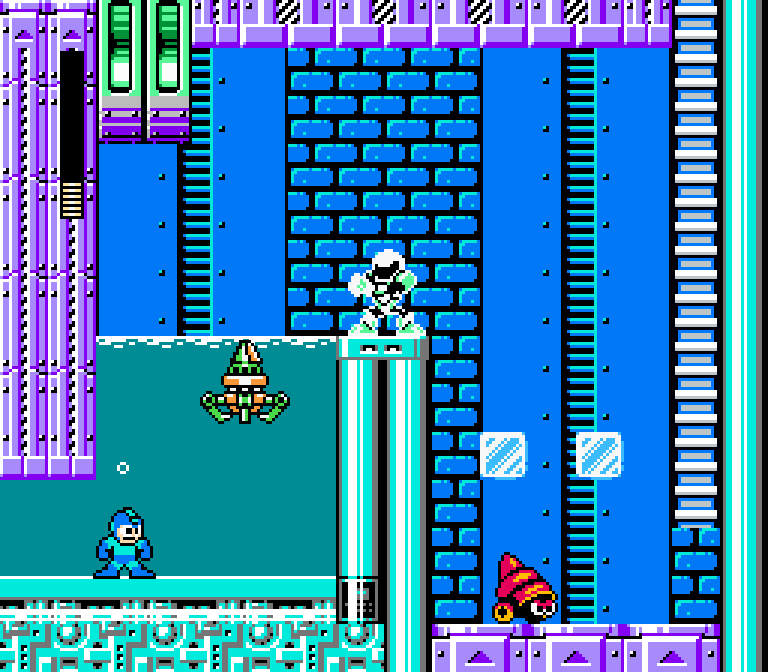 Sometimes ice comes in smaller sizes, so you might want to be so careful! Also look out for Crystal Joes. 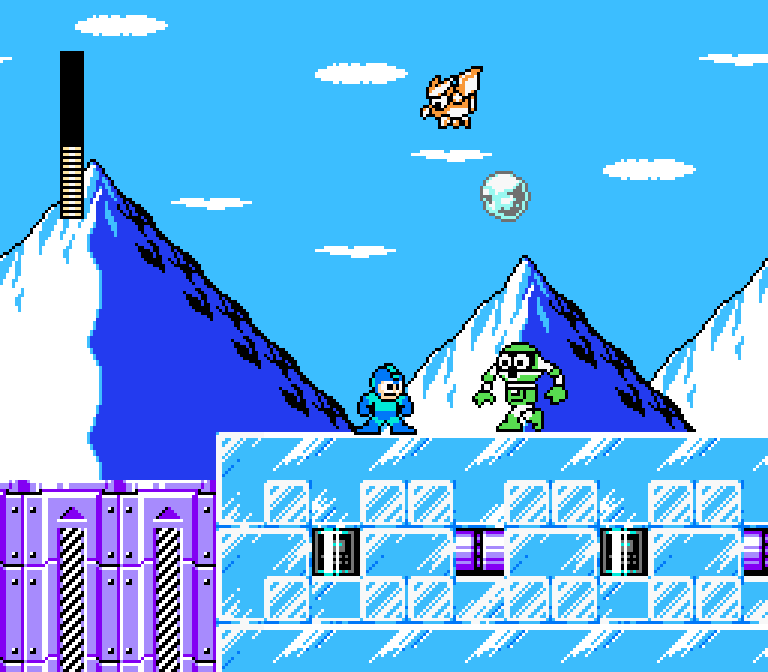 DEATH FROM ABOVE! That's right! Hoohoos are tryin' to throw ice rocks at ya! In fact, you'll want to have weapons later on, especially near the end of the stage. 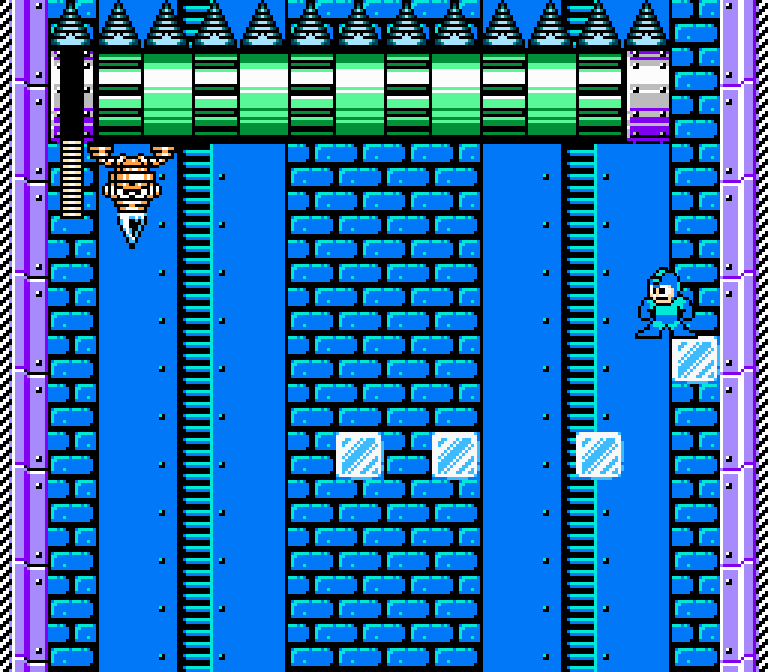 OH NO! It's one of those blindjump areas! You have to wait for the Icicle Teck to come near the last ice block.Then go to the leftmost area! This is the second of the blindjump areas. There are four, and you luckily have the zone you must access to not get spiked in the first blindjump area in this screenshot, the rightmost area! 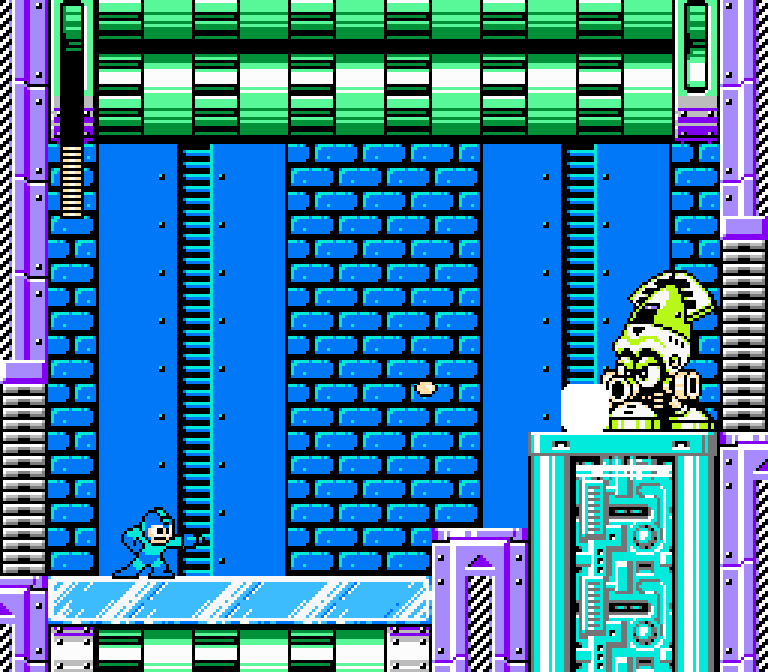 Squidon is this stage's miniboss! Its attack is the same as Rockman 6, so it is easy. 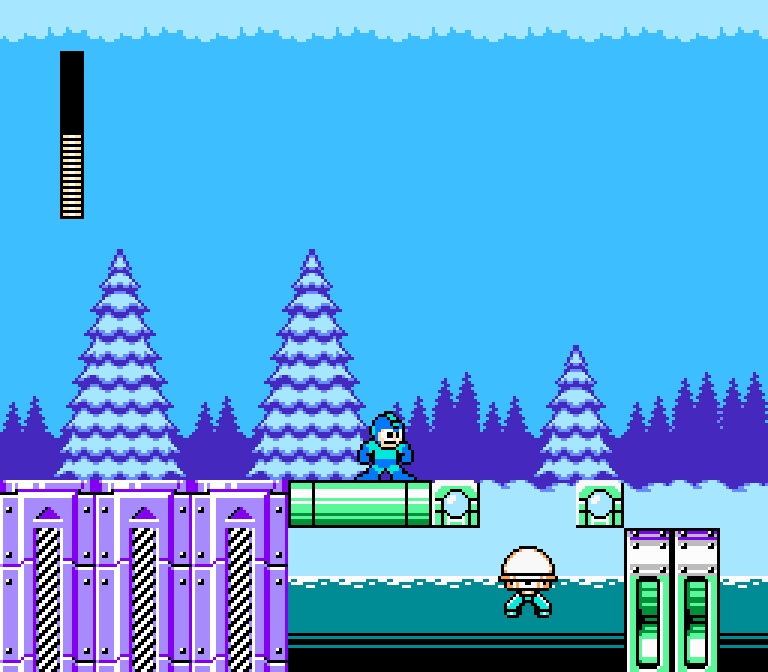 Look out! There are SRU-21/P's falling from the sky when you approach and they float in the water, so look out for their fragments. 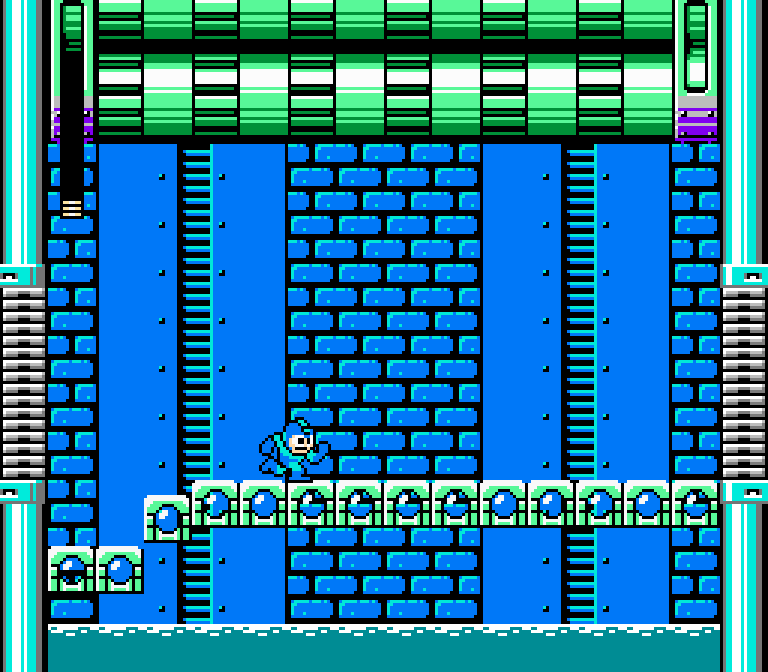 This is the room that precedes Bubbleman's room. You will fall if you step on the platforms. There's also a door over there, but I'd not go there if I were you. 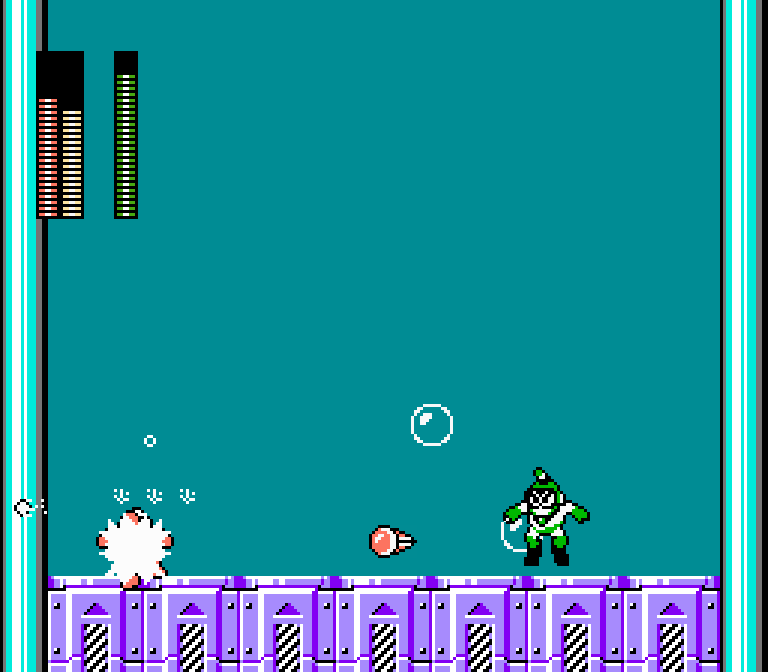 Bubbleman behaves the same as always. He is weak to Clash Bomber (Crash Bomber).

Another Robot Master stage is Airman's stage. He occupies a jungle that is located in China. He infiltrated in a lab in the one some scienticists tried to grow grass underground and it grew. Airman plans to steal it! You must go and stop him! You might not be able to beat him tho... nor you might even beat the stage itself, as it is very hard. Also, this stage is loosely based on Ape Bot's stage from Rockbot, an infamous Brazilian game that is very similar to Rockman. I played it and I liked it, but if you hate it, I respect your opinion.
LIST OF ENEMIES: Hari Harry, Neo Metall (Neo Met), Watcher, Robbit, Adhering Suzy (Octopus Battery), Screw Driver (Screw Bomber), Flower Presenter, Tama-MINIBOSS, Shell'n, Matasaburo (Fan Fiend), Minoan, Hoohoo, Gabgyo.
LIST OF LEVEL OBJECTS: Cossack Platform.
SCREENSHOTS: 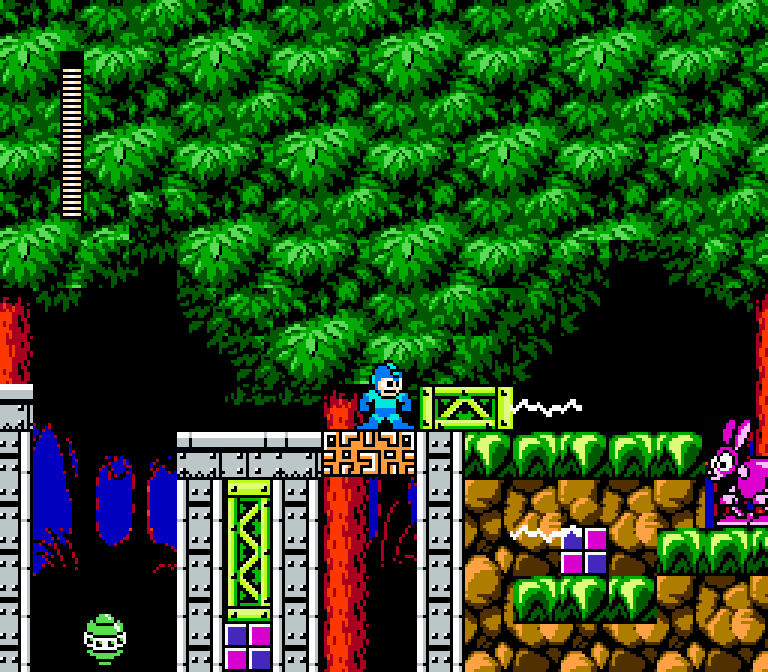 Watchers are quite good as an enemy that comes from botomless pits. In this stage, they act like substitutes for the Jumpiner enemy from Rockbot, who appeared in Ape Bot's stage. Some Watchers come from the upper part of the screen too! 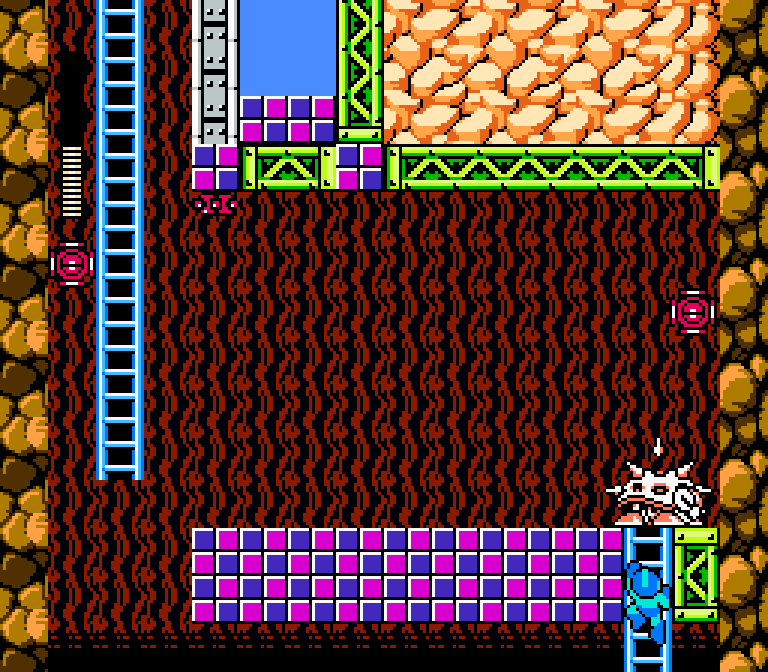 While you climb the upper ladder in this section, you must defeat the Adhering Suzies and Screw Driver for you to not receive damage. Take out the Hari Harry too! 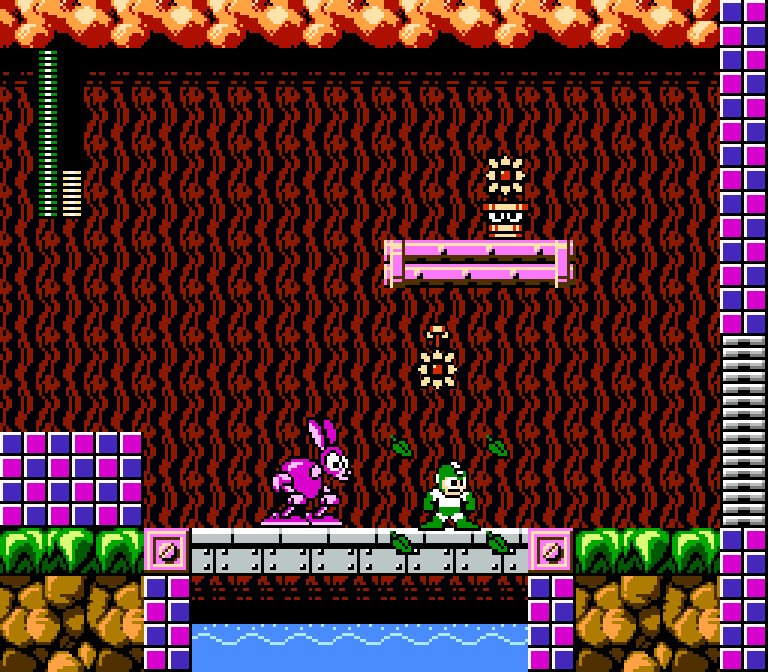 This part can be painful if you lack weapons. You should use Leaf Shield by the very least. 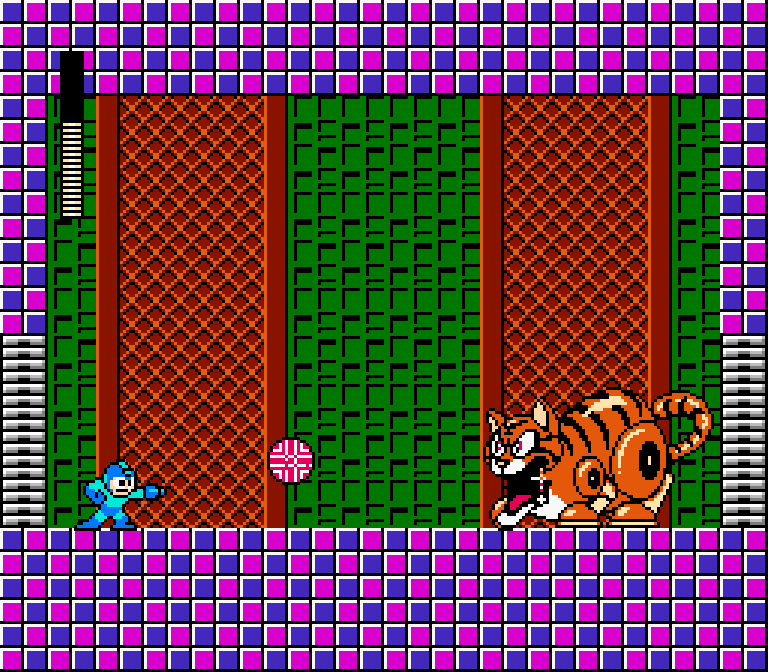 Tama is the stage's miniboss! Look out for its yarn and fleas. There are two of 'em tho. 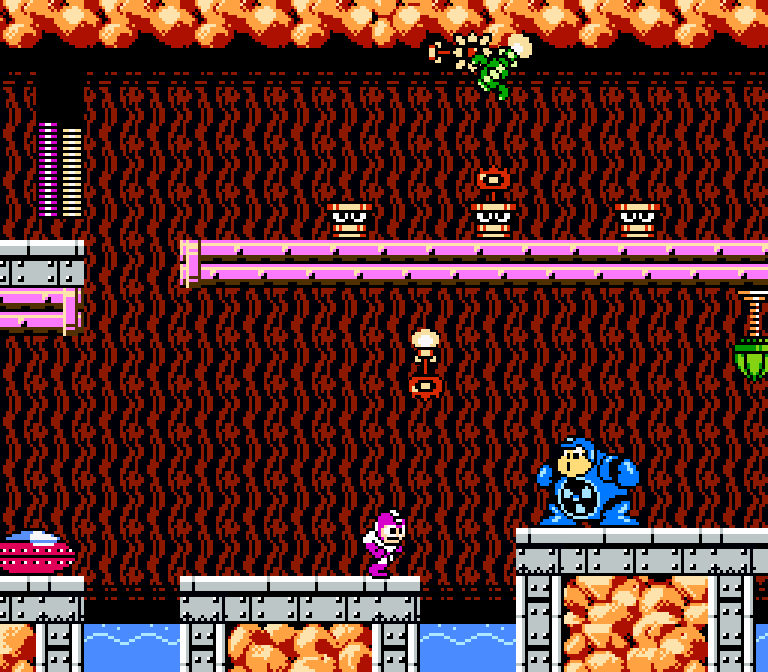 You REALLY need weapons here, especially Time (Flash) Stopper. Not only does it stop time as well as Matasaburo's blowing, but it also negates protections as long as it it active! 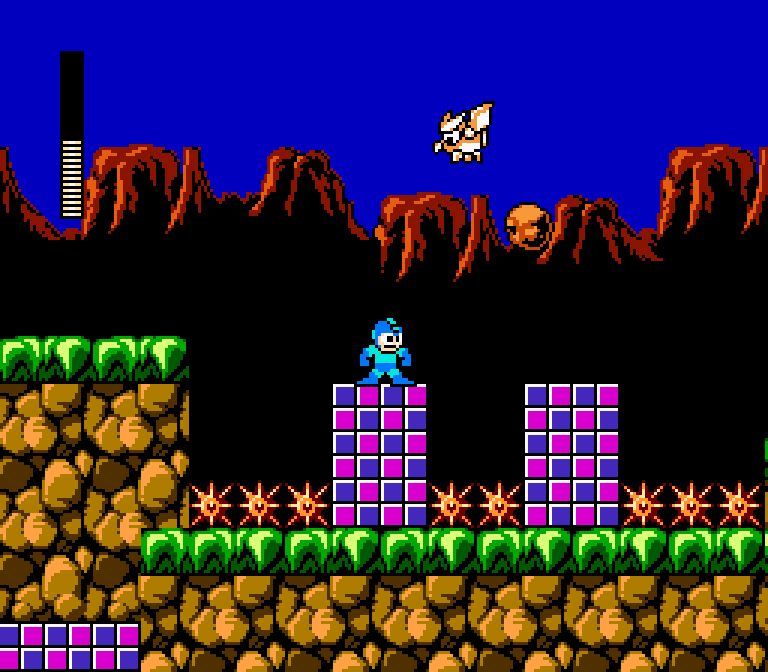 Hoohoos! They throw rock at you just like Pipis throw their eggs. By the way, this jump may look easy, but if you try to jump out of the last platform, a Matasaburo will appear and will try to blow you towards a spike pit impeding you to advance! You just have 3 choices: using certain weapons, making it despawn, or taking damage and walk through the spike pit with the help of invincibility frames. 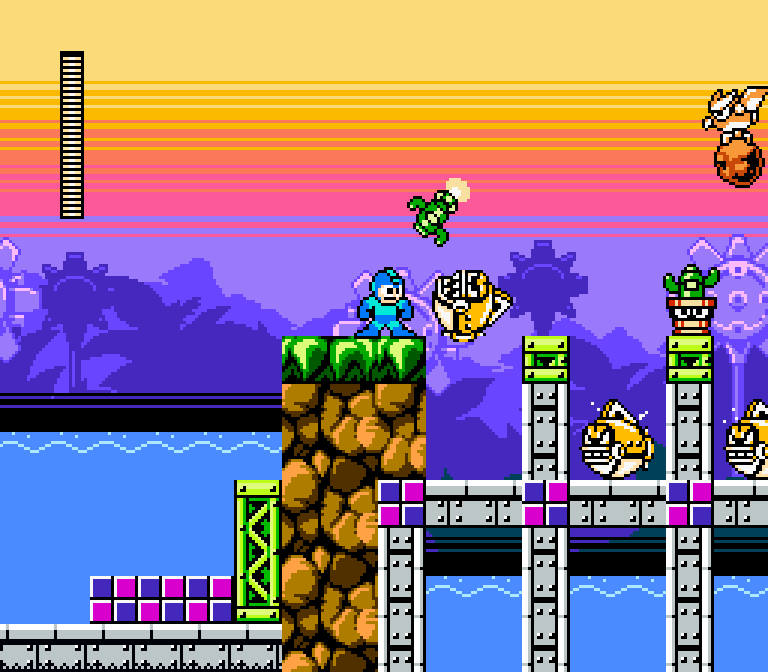 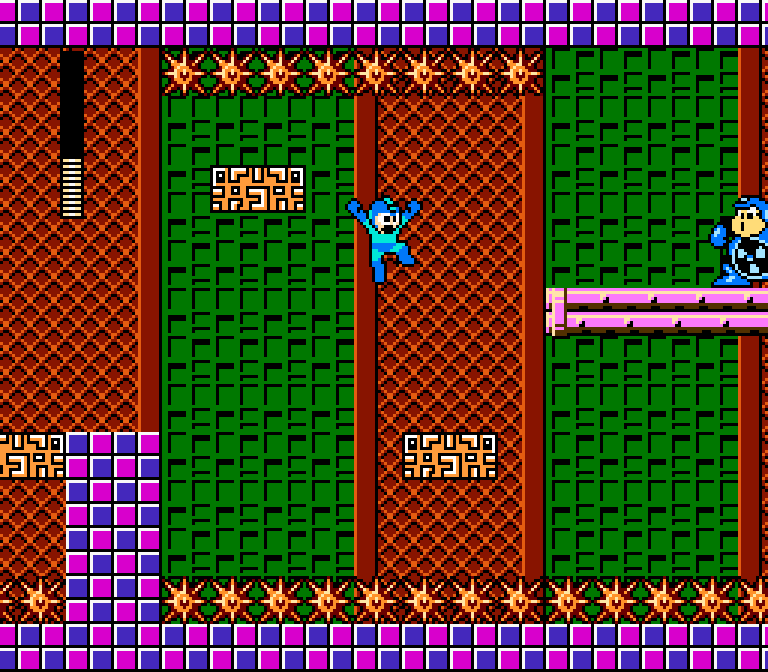 Starting with this point, everything is 100% industrial, as you entered the lab that grew grass underground. This part is not meant for scienticists to be accessed, as there are many spikes. Airman broke through it! You must avoid any enemy that appears in your path while hoppin' on Cossack Platforms. 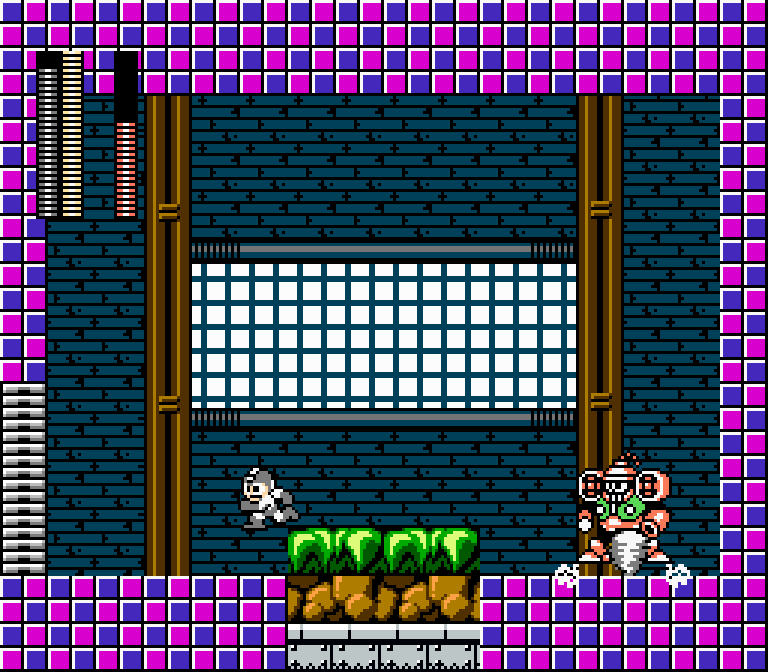 Metalman's stage was submitted today... although hours ago! Metalman is in a smelters located in the southeast of Uruguay. Rockman has to move through the large facility while avoiding lava pits, and must sometimes break blocks to porceed, and also look out for Presses and Conveyor Belts!
LIST OF ENEMIES: Pakatto 24, Pierobot, Cyber Gabyoall, Giree, Blocky, Neo Metall (Neo Met), Shield Attacker, Killer Bomb (Killer Bullet).
LIST OF LEVEL OBJECTS: Dust Block, Press, Conveyor Belt.
SCREENSHOTS: 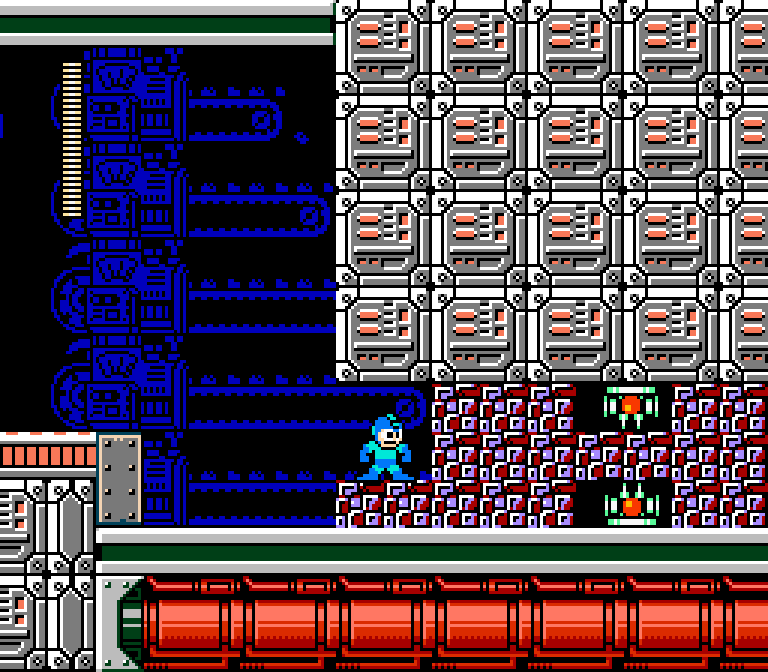 The main gimmick of this stage is to break Dust Blocks to proceed. Be careful tho. There may be Cyber Gabyoalls or Girees within some! 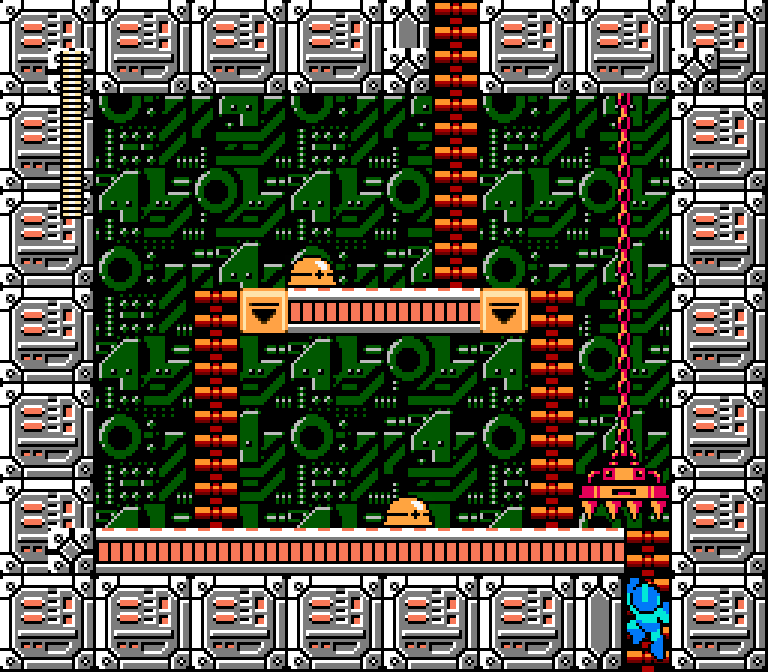 If you climb this ladder, you might want to let the Press fall and when it rises you can advance, but beware the Metalls! 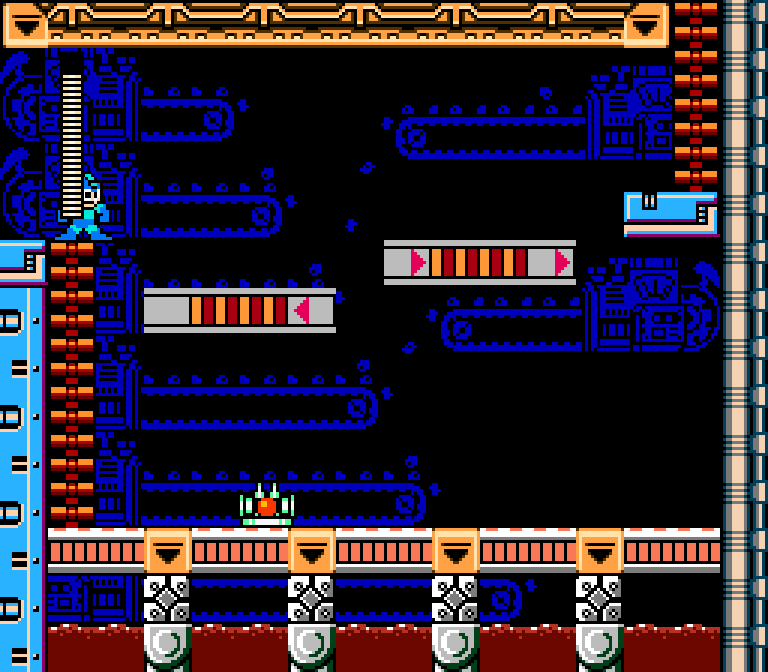 And why not, Conveyor Belts had to appear! They push you the way their arrow points. Oh, and since some lava pits are in this screenshot, I want to point out that I had planned to put Changkeys (Tackle Fire) in this stage, but I decided to add 'em in the currently upcoming Heatman's stage, but I'll not release it until 1.6 appears because of a reason I will tell you when I post the level in this thread. 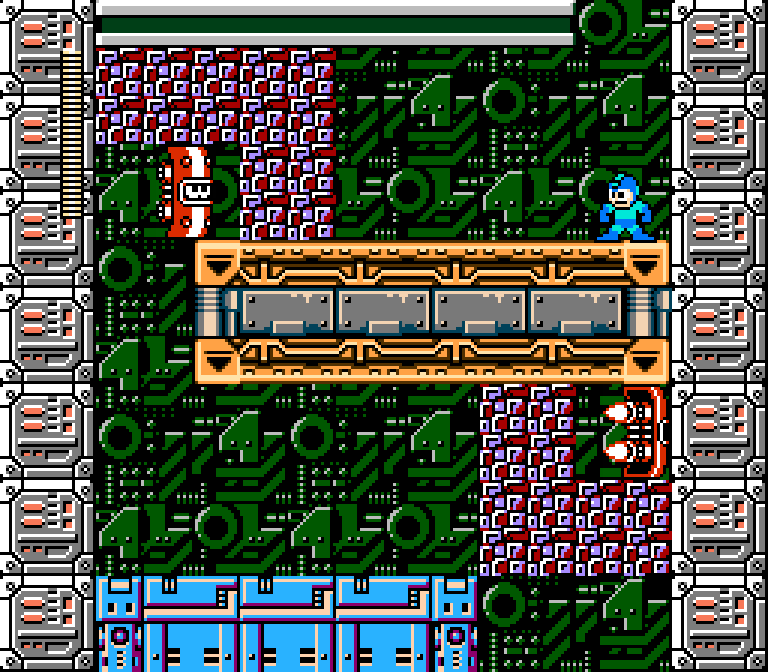 Not only can you find Girees or Cyber Gabyoalls within Dust Blocks, but Shield Attackers may be there too! Well, only in the screen that is seen in this screenshot. There is another Shield Attacker later on the stage. I know, this is the enemy that less times appears in the stage, but it will appear in other stages soon tho! 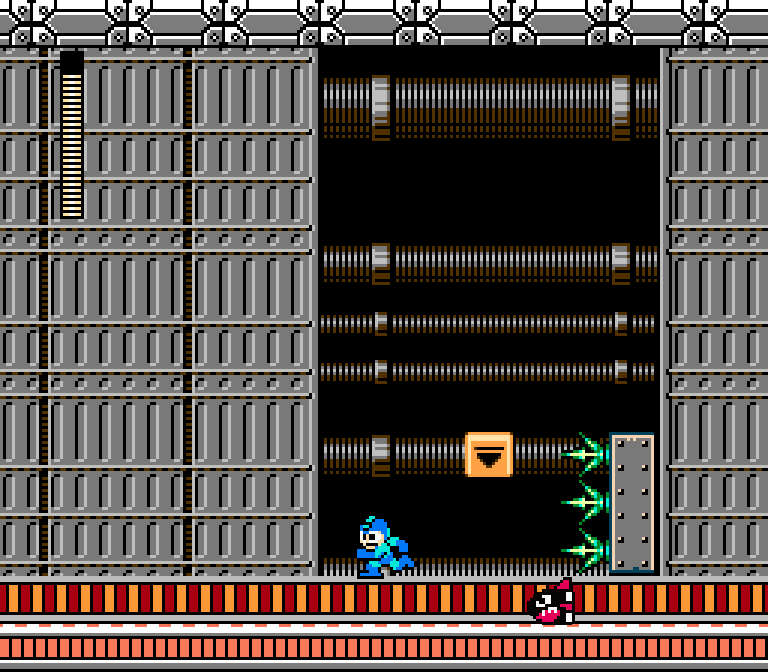 Move through a stretch that consists of a floor that is 100% a Conveyor Belt, but watch out of spikes in the walls of some platforms as well as KILLER BOMBS! 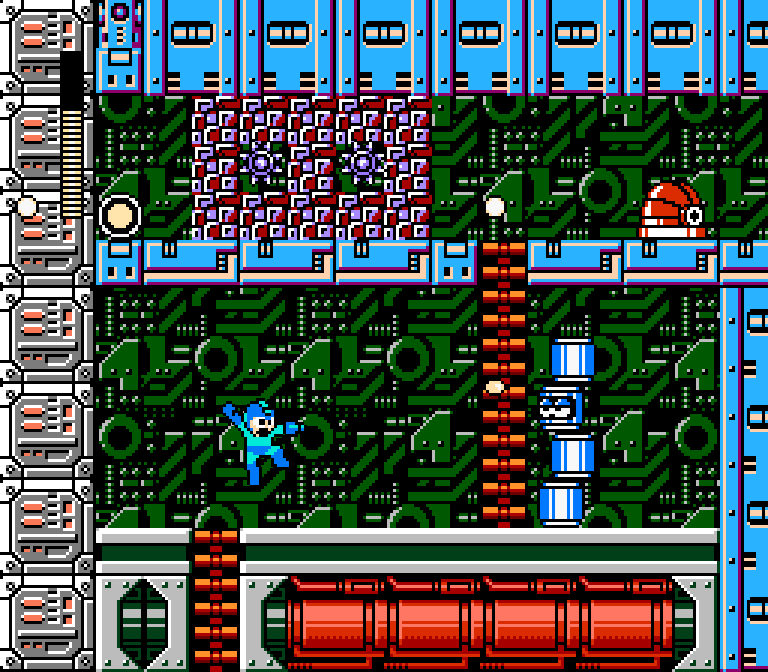 You can find items after some Dust Block paths, but be sure to destroy or let escape the enemies that are within if there is any! 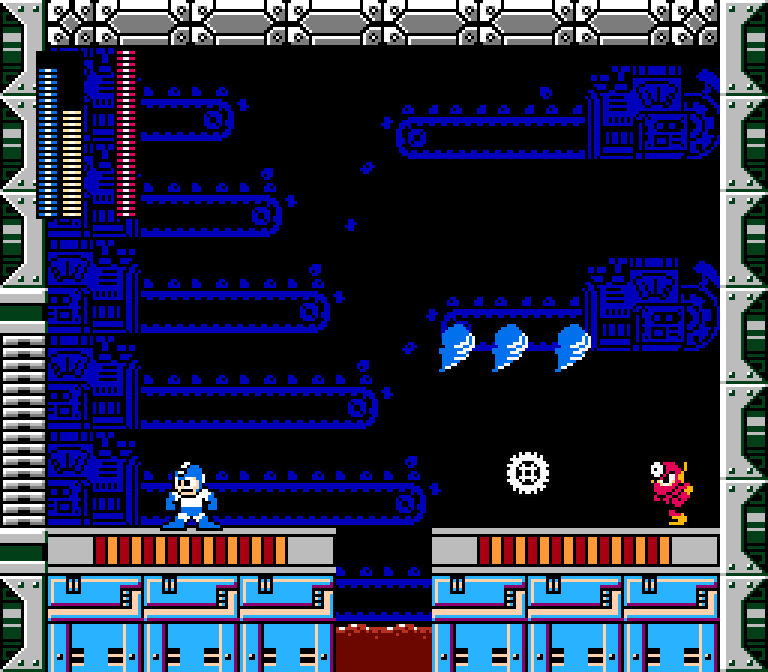 Metalman! There are 2 Conveyor Belts that are separated by a lava pit. Metalman tries to attack from his CB, and if you get into it he'll jump and move to the one you used to be in. His weakness is Air Shooter.