I'm working on a boss rush level that would have every single boss in it, though each room has some sort of gimmick (usually related to a gimmick within that boss's stage) to make it a little more challenging. Generally, I want to start with the easier bosses (even if the room gimmick would make them considerably harder) and end with the harder bosses. I have my own personal opinion on what order they should be in, but I'm curious what you guys think the order should be. Plus there's a few bosses that I'm not super familiar with how they behave, either in general or in MMM, due to not having played their games more than once or twice (such as the MM9, 10 and 11 bosses).

You can put them in one long list from easiest to hardest if you want, or you can just put them into tiers where their placement within each tier doesn't really matter.

But yeah, what order do you think all of the bosses should be in?

Also here's just a brief example of the gimmicks at play, with Toad Man's room. 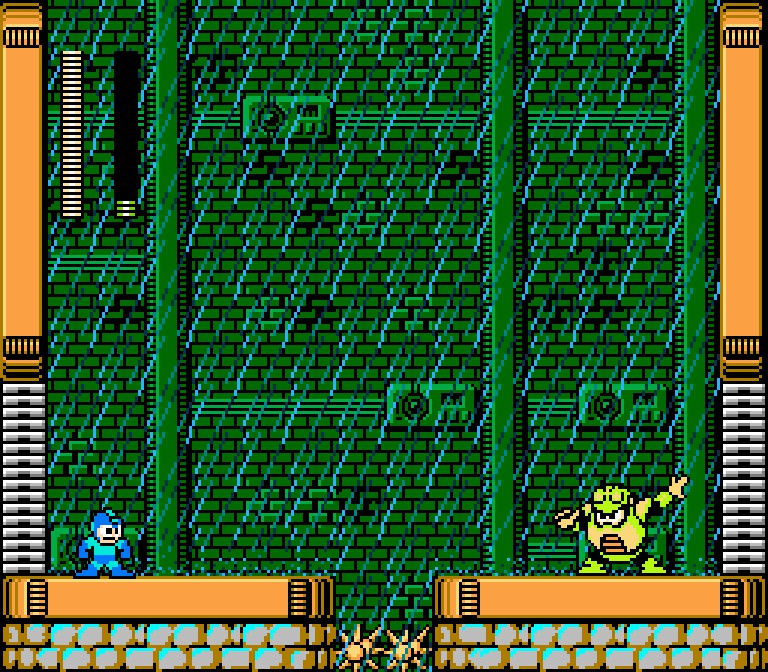 Re: Boss difficulty tier list for a boss rush level?

-D-
Toad Man: Easily beatable with buster if he jumps to you instead of using Rain Flush right off the bat. Even with rain, he seems to be very easy depending on the rain intensity and direction, just as long as you don't jump.
Bomb Man: Not sure what existing gimmick we could add on him aside from spikes. Then again he's just very easy to beat if you stay in a platform away from spike pits.
Ice Man: Even with water and a few Yoku blocks won't make him harder to defeat.
Pump Man: Copying Bubble Man's boss room layout, may be worth the salt, but still, Pump Man can fight on dry land.

-C-
Cut Man: I find him easy in this case even with the spikes and elevated areas, if you constantly dodge his Rolling Cutter.
Bubble Man: If you had played Mega Man 2, I guess it's best to consider how tough he is underwater since it's his level gimmick by default.
Wind Man: He is rather beatable as long as you have some areas that have no upward fans in them.
Magnet Man: The wall magnets can do wonders but I still think he's easy even with the magnets.
Top Man: I get the point you placed him on the same level as Cut Man, but the lifts will be a good twist to the room. Still, I had to rate him this low for it since his attack pattern is very easy to remember.
Splash Woman: The platforms add a bit of difficulty, though not that much since it's also an advantage if you want to show her how it's done.

-B-
Ring Man: His attack pattern may be easy, but adding his level platforms makes him harder to beat with just a buster.
Crash Man: I find adding the Crash lifts on his room makes it even harder to beat Crash Man. I also remember his stage never had spikes in them, so it's safe to consider the fair rating for this robot master.
Skull Man : Spikes and uneven terrain will do.
Sheep Man: It depends on the placement of Sheep blocks and spikes. And I would also prefer adding spikes at the bottom to make it hard. Then again, I only rated this B because I tried this guy on a WIP level of mine, and he's not that hard even with the floor lights, just as long as you know his attack patterns, and the sequence of his Thunder Wool.
Fire Man: I had to add a couple of fire wave spawners much to my preference, but adding other elements from Fire Man's stage will surely up the ante.

-A-
Plant Man: This reminded me of the time I added him on a level I was working on and the room flooring is filled with springs which makes him rather hard to beat in my personal experience.
Metal Man: He is B by default but adding some presses on his room spikes his difficulty depending on how close you are to one of the presses.
Spark Man: The Electric Gabyoall makes up for the added oomph.
Freeze Man: Just add some spikes and a slippery flooring.
Hard Man: He is hard as-is... get it? But adding Wanaans in the room makes him even HARD-er but still if you know how to deal with Hard Man normally, you should be also aware of the Wanaans biting at you from below.
Bounce Man: The I had to rate him on par with Plant Man since I find adding bounce balls all over the room makes his nearly tough and a nice way to try out a raft of evasive maneuvers as you bounce around.

-S-
Quick Man: Lasers. I find that idea to be fun yet brutal especially if you use the red force beams and place them in a way you will not have enough space to move.
Pharaoh Man: Rule of thumb, never use a bottomless quicksand pit. I also think it's because of how he ignores quicksand physics and keeps himself hidden to give you a hard time defeating him if your quicksand pit is deep enough to keep him hidden.
Flame Man: I suggest oil pits will do the trick. But if you had a huge one, there is little chance of surviving the fiery pit.
Concrete Man: As-is, he's kinda hard for me, but adding some elements like spikes and lifts will make it even more brutal.

There may be more I haven't covered in this list, since I haven't figured out what stage elements each of the every other available Robot Masters as of 1.7.4.3 have to be added in their boss rooms.
Astro Man - Seeing Stars: 513293
Go Go Proto Man: TBD
Perfect DiVE: WIP
Uber Adventure 1:TBD; 2:TBD; 3:WIP; 4:WIP
Uber Quest: TBD
Top

Re: Boss difficulty tier list for a boss rush level?

Here is my list for Mega Man, buster only, no weaknesses, Mega Man 6 charge, slide enabled, and in a flat room. Note that aside from S tier, there isn't really a hard line between tiers, and the order within tiers isn't too strict either unless there is a big gap between the Robot Masters.

As far as boss rushes go, I would say that generally, without any weakness weapons, S tier is a run killer, A tier is going to make me want for a health pickup, B tier will wear me down, C tier isn't really all that bad, and F tier isn't even a speed bump.

EDIT: I should note that changing the room layout changes the dynamic of most fights, so there's no real way to gauge how easy or hard they would be given infinite possibilities. My advice would be to make all of the arenas first, and then order them as you see fit.
Top
Post Reply
3 posts • Page 1 of 1