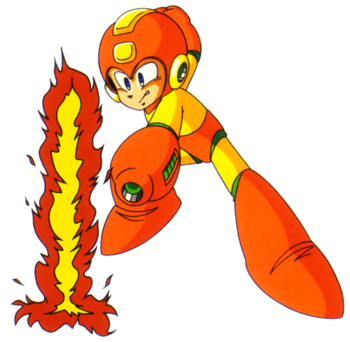 Obtained from Flame Man, the Flame Blast fires a small ball of flame in a downward arc, which erupts into a small pillar upon touching a surface. If standing on the ground, the ball will reach three tiles out from the user's position. The pillar reaches two tiles outward from where it landed, and lasts for 0.5 seconds before disappearing. If shot underwater, the ball falls faster, which reduces its range to two tiles out from a standing position. While lacking range and being unable to go through walls, it makes up for this by being immensely powerful in relation to its energy cost. Certain Ice Walls can be melted by this weapon too. If the ball touches an enemy shield or other reflective object, it will bounce off and keep its momentum. Strangely, it cannot ignite the oil in Flame Man's stage on revisits. Au-Au, Spring Face Bomb, Gorilla Tank, and Gamarn and Gamadayu are weak to this weapon in MM6.

Flame Blast's damage output has been decreased to 3 units in MMM, but it otherwise works mostly the same. It can no longer rebound off of armored surfaces either, instead being deflected like most weapons. Oil and other flammable objects are now properly ignited, and the ball projectile is now affected by low gravity induced by water. When standing underwater, the ball will reach four tiles out from the user's position. The pillar can affect Weapon Blocks and Ice Walls that are directly above it, since they are coded to disappear when any fire is detected next to them. Pillars will form on Dust Blocks, meaning they can only be broken from up close, while Chill Blocks and Pole Eggs will be broken instantly upon contact. Pillars still form on most reflective objects, but not enemy shields, On/Off Switches, Gockroach Nests, or Weapon Blocks marked with this weapon.

All in all, Flame Blast can make for a decent secondary weapon or buster replacement due to its lowered power and arcing trajectory. It would have even more potential for trickshots and puzzles were it still able to bounce off of shielded objects and enemies.