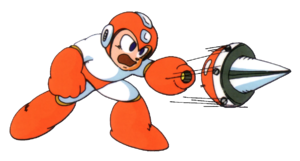 Obtained from Clash/Crash Man, the Clash/Crash Bomber enables the user to stick a timed explosive to solid surfaces, which explodes after 3 seconds. The ensuing blast is about 2x2 tiles big, hits up to 7 times, and is capable of breaking certain walls such as the ones in the Boobeam Trap. Blocky, Robbit, Pierrobot, Shrink, Kukku, Monking, Fly-Boy, and Crabbot will be instantly killed by this weapon, and it will explode on contact with the first enemy listed. In all other cases, it continues on through defeated enemies. This is one of two weapons capable of defeating Big Fish.

Only 1 Bomber can be onscreen at a time, and this includes those that are stuck to terrain. Weapons cannot be switched until it disappears. Because of its long fuse, the user is a sitting duck until it explodes, making it unsuitable for enemy groups. Croaker, Hothead, and Hot Dog are immune to Crash Bomber. Heat Man will recover all of his health if hit by this weapon.

Crash Bomber in MMM recieved some useful changes, such as how it explodes on contact with all enemies, as well as a shortened 1-second fuse. The damage of the individual hits in the explosion is increased to 2, meaning it can do a total of 14 damage through its duration. The Bomber also sticks to enemy shields, potentially allowing it to be moved along with them. It attaches to destructible terrain and Weapon Blocks marked with it before exploding. Compared to Flash Bomb, it can fit through narrow passages much more easily. Okosutobon can be destroyed by the Bomber. As far as bosses go, it can be stuck to Magnet Man's magnetic field and Knight Man's shield, and will pass through Skull Man's Skull Barrier.

If stuck onto a solid object that changes position, it will not be moved along with them. It cannot stick to Bokazurah, Giree, or Gabyoall-type enemies.

When considering Crash Bomber for your level, do take into account it's advantages over Flash Bomb for intricate setups, as well as it's disadvantages for energy efficiency and damage output.

Nice weapon analysis, it is really kind of a shame that Crash Bomber doesn't stick to movable platforms and other solid surfaces in Megaman Maker. But I didn't even consider making stuff using the ability to stick to movable enemies in order to have contraptions and stuff that might use it, so thank you for your weapon analysis on that regard.
Top

Had no knowledge of all the useful buffs that Crash Bomber had received for MMM. Very very helpful information.

Croaker, Hothead, and Hot Dog are immune to Crash Bomber.

Is this still true for MMM? When reading it looks as this information is referring to MM2.

Blue_Bummer wrote: ↑
Wed May 20, 2020 2:21 pm
Had no knowledge of all the useful buffs that Crash Bomber had received for MMM. Very very helpful information.

Croaker, Hothead, and Hot Dog are immune to Crash Bomber.

Is this still true for MMM? When reading it looks as this information is referring to MM2.

Also, how does the damage of Crash Bomb compare to Flash Bomb? Is it higher or lower (including the total damage of the multi-explosion)?

The three enemies listed are no longer immune in MMM.
Crash Bomber does slightly less damage than Flash Bomb. The latter deals a total of 15 damage through its duration, with less damage per hit (the hits are too fast to count).