Discuss level design, whether in general or related to your levels
Post Reply
28 posts

Sphyria wrote: ↑
Thu Mar 26, 2020 2:07 pm
Amazing level! Probably one of your best lately, along with your rebooted series! Really, it was a very cool challenge, especially if you try not to get hit. That's one hell of an electric tower haha!

- Thanks for playing and I'm glad you enjoyed! Yeah this level was a lot of fun to build and came out pretty quickly all things considered. The elevator section was the hardest part for sure! Trying to make it feel challenging and kind of frantic yet still being fair was a big hassle! Thanks again for playing!

The boss was pretty fun too. Proto-Man however suffered from a lack of weapon energy, I got soft-locked facing a sniper joe and couldn't damage boost because of double damage.

- I would agree with you on the soft-lock but Protoman can deflect Sniper-Joe bullets back and kill them like that if weapon energy runs out. But yes, I understand that shield-reflecting can be exceptionally tough when on the drop-platforms and the electiri's coming forward. Maybe a few more random small-pickups would have helped. I thought Hard-Knuckle was the easier weapon to use. Did you try both?
Top

So uh before we work on the collab there is an pretty old level of my.
I uploaded it like 2 years ago and I was wondering if you could spruce it up.

CommanderShramp wrote: ↑
Thu Mar 26, 2020 4:57 pm
So uh before we work on the collab there is an pretty old level of my.
I uploaded it like 2 years ago and I was wondering if you could spruce it up.

- Sure! I'm currently working on an entry so I'll start this as soon as it's done! I'm also shifting my policies on collabs as well... Only one at a time. Currently in a collab project with D-Man. After that's done, I will be collabing with Syph, and then I could start a project with you.
Top

- Episode 4 is finally here! This one focuses on another very old stage called: "Waterfall Castle" by a builder named Kontos. Here is a level-link for the original publication: https://megamanmaker.com/?level=10207

This level was very bare, so I took the liberty of adding a character-select screen and some alternate areas/challenges! Protoman again has an option of his starting weapon being either Buster or a limited secondary-weapon. Megaman serves as an easier challenge with his better durability. Hope anyone who tries it out has a fun experience! Thanks! 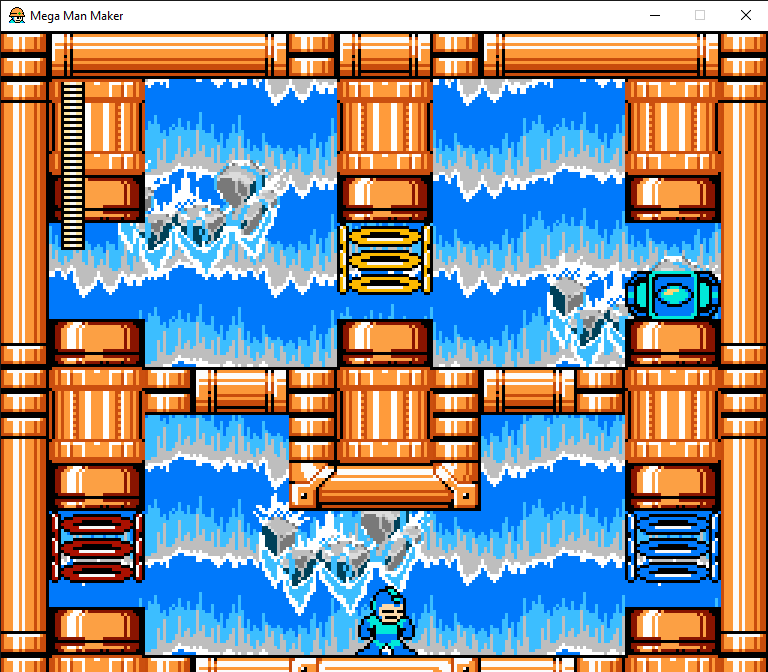 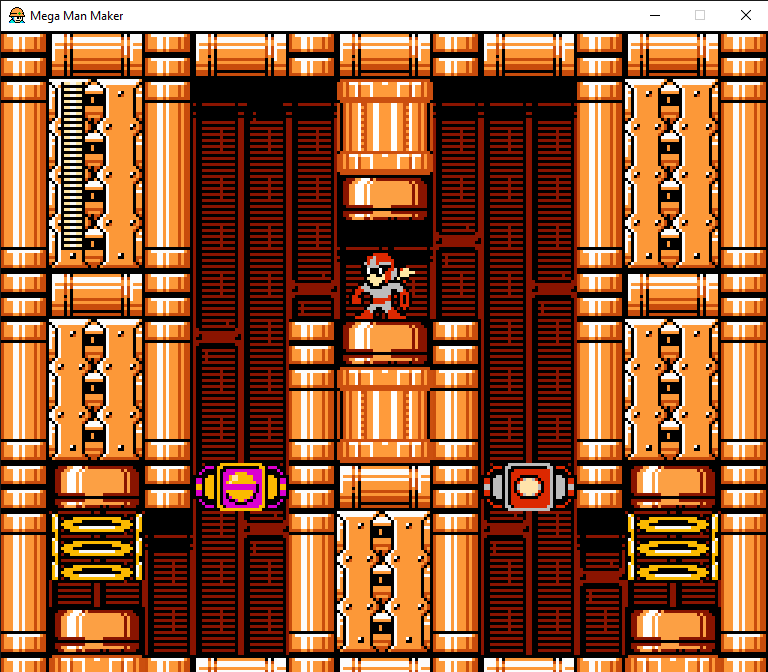 Bounce-Ball is a weird weapon indeed... 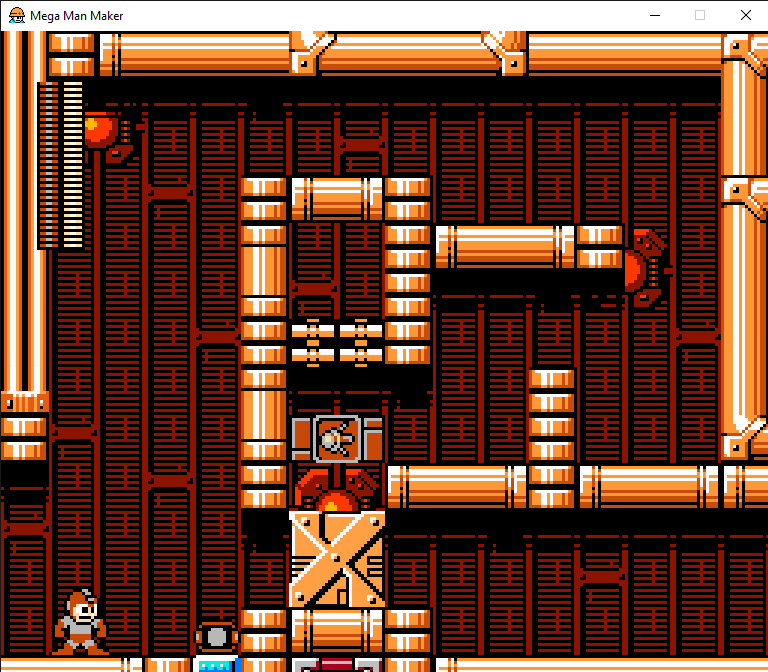 Players wanting Commando-Bomb will have to prove their proficiency with it first... 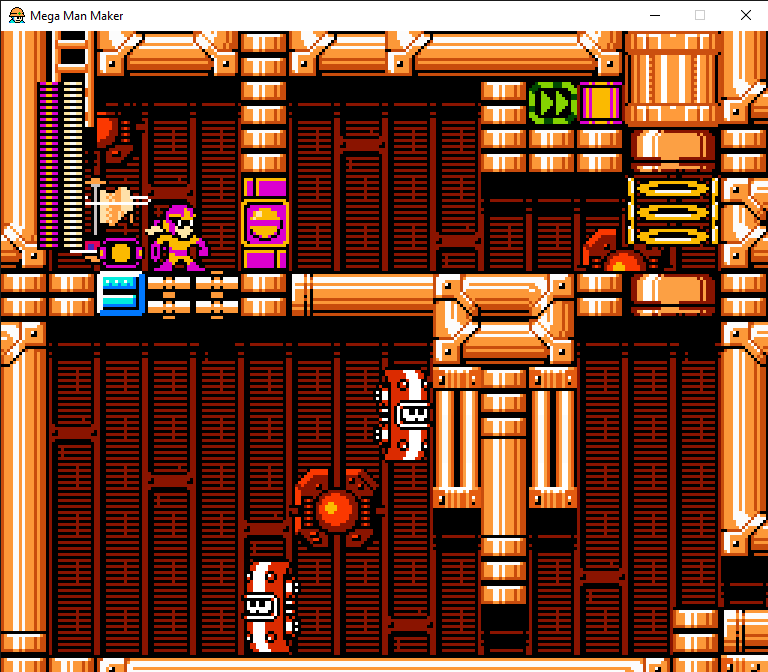 Protoman will have a shot at a heavily guarded M-Tank...

- Well, now that Episode 4. of 'Old Made New' is available, I think I'll be taking a break from this project until 'Megaman Rebooted Pt.3- Wily Fortress' is completed. Thanks to everyone who's played the levels in this series so far and I hope you keep returning for more as new episodes release! Remember, however, that these are only meant to be uploaded temporarily; and I'll be removing Episode 1's level from the servers on April 4th. Episode 2's level will be coming down on April 8th. Episode 3 will be deleted on the 14th of April; and Episode 4 will be gone the 22nd of April. Thanks again for checking these out and remember to play the original publications also!
Top

Re: Old Levels Made New Making a Return?!

- Hey everyone! I really enjoyed doing this mini-series last year but was afraid of being branded a plagiaristic. But if someone 'submits' a stage to me willingly, then it's perfectly fine! So feel free to submit a bad or old stage (of your own creation) to me and I'll do my best to spruce it up into something passable! I've got some extra free-time coming up so the challenge will be very welcome! Thanks and happy building!
Top

- New Episode coming soon! The stage being featured is kind of an enigma... On Level-Showcase (pg.107), it's titled "Hidden Power-Plant", by Shadic64. But when you type in the ID, it comes up as "Glacial Meltdown". The publisher listed on the stage info-screen is named: VEE4HEALING... Anyhoot, the stage had very few plays and when I tried it out, it was an absolute mess.... troll stuff, spammed enemies, cramped layouts, lack of theme/gimmick-usage... Pretty much every design sin you can think of is in this one

. To top it all off, the level is under 20 screens so it's really miniscule. I'm going to attempt to work this into something passable but it's pretty rough, so bear with me,

Here's the ID for the original publication: https://megamanmaker.com/?level=125554
Be sure to give it a quick try so you can see what I had to work with and thus compare to the new publication when it finally releases! Thanks again! Remember to drop some request ID's if you want!
Top

Hello all! The next instalment of 'Old Levels Made New' will focus on a stage created by the forum user: Paradise! The level is called "Blimp Chase". Here's the ID to that publication: https://megamanmaker.com/?level=10870
The aim for this stage (according to Paradise) was to make something traditional that focused on Coltons in various setups. While it was definitely an ok stage, the layouts/tilework were a little lackluster... and it also failed to have true gimmick focus and something 'windy' to make it feel like a sky-stage... A great effort by Paradise since the available assets at the time it was made were almost nonexistent

! I plan on greatly expanding the level to include an additional character and an optional E or M-Tank route. I'll keep the Colton focus and a single boss to honor Paradise's vision but am otherwise planning on going all-out with this one! Hope you will all enjoy!
Top
Post Reply
28 posts