Originally I was going to have this debut at the same time as the wiki's magazine, Light's Lab Inc., but I'm not sure if the first edition will be out this month.

Obtained from Tengu Man, the Tornado Hold is one of two weapons that he masters. It differs from most weaponry in that it shoots out a weak fan blade in a downward arc which adheres to the ground it lands on. Once it lands somwhere, a mighty tower of wind rises from the propeller, covering a great vertical distance but a small horizontal one. Only one Tornado Hold can be onscreen at a time. The fan passes through certain platform objects like Count Bombs, and the gust rapidly deals damage per frames of contact, ensuring that any regular enemy will be destroyed within seconds of being caught within it. Wind is generated for 2 seconds before stopping, and it will stop at ceilings or the surface of water. If the fan blade is moved offscreen, it will stop generating wind. If it hits a wall or enemy when it's first shot out, it will fall straight down. The powerful gale can also erase projectiles, as well as lift certain objects too.

MMM tones down the Tornado Hold's damage output to 0.5 units for the fan, and 1 unit per hit for the tornado itself, being able to do up to 10 damage throughout its duration. When shot out, it goes 2.5 tiles forward on even ground, but is affected by water buoancy as well, going 4 tiles forward underwater. The wind is now able to go past the water's surface too. If the terrain on which the propeller sits were to disappear, the propeller will remain stuck in midair throughout its duration. Conveyors and other moving surfaces cannot move the Tornado Hold. While reflective objects can remove the fan once it's set, Cyber Gabyoall cannot. The weapon can be refired if a tornado is still onscreen, but the propeller is not. Finally, the wind can put out fires produced by Fire Beams and Flame Pillars.

While not as busted as its original incarnation, the Tornado Hold can still make for a fantastic platforming utility, shield, and anti-air weapon all in one package.
Last edited by D-Man on Sun Oct 25, 2020 8:46 pm, edited 1 time in total. 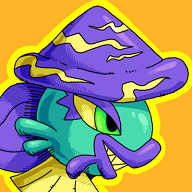 This is a fun one. Helps you out with firing upwards when not playing as Bass and can also be used to gain height. I enjoy occasionally giving players this weapon as an option in my levels.
Top

You didn't realize it, but the tornado can also put out Flame pillars and fire beams and is a combo weapon, which is good for destroying enemies like brain breaker and Crabbot, plus now the damage is not as fast as in MM8.
Top

14Protoman wrote: ↑
Sun Oct 25, 2020 5:21 pm
You didn't realize it, but the tornado can also put out Flame pillars and fire beams and is a combo weapon, which is good for destroying enemies like brain breaker and Crabbot, plus now the damage is not as fast as in MM8.

I did not know about the part involving firey objects. I'll add it to the main post.