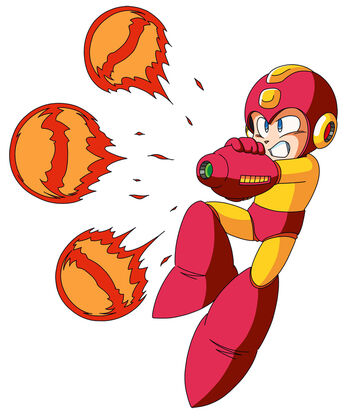 Obtained from Magma Man, the Magma Bazooka fires a flaming spread shot, with one fireball going forward, and the other two going diagonally up and down. These shots use 0.5 units of energy. The weapon can also be charged for 0.5 seconds, and once released a larger and stronger spread shot is sent out, using 3 units of energy. Charged shots can erase certain enemies' projectiles when they contact it too. Furthermore, each shot deals damage independently of each other, so if used at point-blank range, an uncharged shot can deal 3 damage, and a charged shot 9 damage. Against bosses not weak to it, close-up shots can deal 2 damage, regardless of whether or not it's charged. It's downsides are the lack of power an uncharged shot has at a distance, and the inability to refire unless all three fireballs leave the screen.

MMM keeps the Magma Bazooka nearly the same, but charged shots no longer erase enemy projectiles. It can set Oil on fire, as well as light up TNT Blocks due to being a fire-based weapon. Versus bosses, charged shots deal double or triple damage based on weakness settings, and landing all three fireballs at once will deal double damage. Both damage multipliers stack with each other. Notably, landing three charged Bazooka shots at once on a boss with a primary weakness will instantly kill it.

In conclusion, the Magma Bazooka works best as a close-range weapon that can make short work of even minibosses thanks to how each fireball deals damage separately. It can also serve as a viable replacement for the Buster since uncharged shots use a small amount of energy.