Happy Thanksgiving everyone! I didn't bring a turkey, but you can have this Weapon Analysis instead. 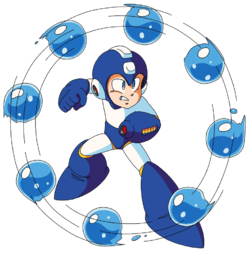 Obtained from Pump Man, the eighth shield weapon in the series deviates from the others in many ways. Rather than be comprised of four orbiting objects, the Water Shield is instead made of eight water droplets that can each take a single hit from projectiles or direct contact with enemies. It takes 1 second for the shield to form completely. The droplets are spawned rotating clockwise if facing right, and counterclockwise if facing left, and always start under the user regardless of direction. Releasing the shield does not send it forward, but rather it spirals outward in a manner similar to Power Stone. Once released, it can no longer block projectiles.

Another thing that sets it apart from its predecessors is its tendency to not protect the user sometimes. This is due to the slow speed the droplets rotate around the player, as well as the gaps that form in the shield as more hits are absorbed. Even with a full shield, the spiral attack has a low chance of hitting your intended target, since the droplets are small.

Water Shield has two noticable improvements in MMM. The first is that each water droplet can now absorb two projectiles while attached to the player, and a droplet will become brighter to signify when it has taken one. The second is that the speed at which the shield spirals out when it's released has been increased, thus making it easier to land a hit. Like other water-based weapons, it can put out Oil Fires and dilute Chemical Solution, though it doesn't affect Flame Pillars and Fire Beams. The amount of droplets used to decrease the acid's level varies based on frames of contact. While attached, if falling on to an Oil Fire from a height of 5 tiles or greater, it will kill the player and put out the fire simultaneously. It may or may not happen at a 4 tile drop as well. Objects that make the player fall faster can help induce this type of death at shorter drops.

With all this in mind, Water Shield is a balanced shield that can bring a powerful melee-range offense, a strong defense, and some utility due to its interactions with fire and acid. It's only faults are its higher energy expenditure and slow startup compared to its predecessors.