Oil Slider - From MM: Powered Up 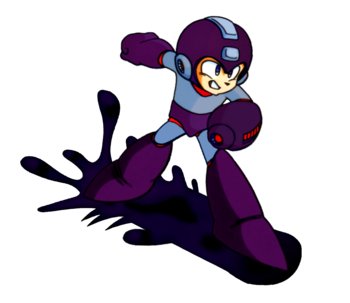 Obtained from Oil Man, the Oil Slider differs from most melee weapons in that it does have a projectile attack as well. Firing it will send an oil blob in a downward arc 2 tiles away, which sticks to the ground for 3 seconds. If used underwater, the blob will float in an upward arc to the surface. There can only be one slick onscreen, and the damage dealt by it is very low, but when stepped on by the user, it transforms into a board that allows them to ram into enemies. While riding on Oil Slider, the user can adjust their speed by holding left/right, and can do a 1 tile-high jump off of it in midair, dismounting it in the process. Mounting the board underwater will cause the user to float up with it, and they can skate over the surface of water. No knockback is recieved if damaged while riding, unless the user touches any fire-based obstacles. Gabyoalls can be defeated with both forms of this weapon. It can even disarm shields from certain enemies, though the user will certaintly take contact damage if an enemy is not completely defeated by Oil Slider. Touching a wall will make the user dismount the board, which makes it difficult to use in closed spaces.

Oil Slider in MMM recieved a slew of improvements, most of which are based off of Oil Man's version of the weapon in Powered Up. Three oil slicks can be onscreen now, and they now deal 2 damage. When fired underwater, the blobs float straight up. In board form, it deals 4 damage, and the user has complete immunity to contact damage. However, all projectiles and most hazardous objects are now capable of knocking them off the board. The user's speed can no longer be adjusted, either. The midair jump off of the board is now 3 tiles high, and touching a wall will no longer dismount the rider. The jump height reduction caused by standing in Oil is ignored while riding Oil Slider. When riding over water while rain is active, they will be subject to its effects, since they are technically not touching solid ground. Against bosses, the board will deal 4 damage if set as a secondary weakness, and 8 damage if it's a primary weakness.

While difficult to use originally due to its risky method of dealing damage, the changes made to Oil Slider in MMM make it incredibly useful as a low-ground projectile, direct-contact attack, and platforming aid. Since the user can pass through most enemies harmlessly while riding the board, proper placement of walls and projectile-shooting enemies must be used to prevent the player from cheesing entire levels.

Users browsing this forum: No registered users and 7 guests