I don't know if anyone has suggested this before, but basically,

Boss Blocks and Boss Barriers
Weapon Blocks/Barriers, but for bosses.

1) Why?:
There are really two main reasons for why this could be a good addition.
The first one is that we have bosses in the game without their corresponding weapons, which I'm pretty sure means it's impossible to have them destroy terrain or barriers. I think it's more likely that we'll have more weapons without their respective bosses than bosses without their respective weapons, so in the end most bosses would probably be able to break a corresponding barrier, but for now it would still be a welcome addition.
The second reason is that some level creators may use up all of the weapon slots, and want to use a boss whose weapon isn't in the player's weapon set. I don't usually see good levels with every weapon slot taken (with the exception of some full game-style levels), but since there are multiple people who suggest more weapon slots, or just people who don't really know how to design a level around the player's weapons so they just fill every slot, I think some level creators will probably make use of this asset.
Other benefits involve not having to include a weapon in the level that will stay locked the entire time, bosses being able to break terrain that the player can't, and terrain that can block boss projectiles (if set to Nothing).

2) How?:
Boss Blocks/Barriers will probably be located in the miscellaneous Bosses tab, as although they are level objects, only bosses can interact with them. It would still be appropriate in the general Level Objects tab, though.
When selected, a similar menu to that of the Weapon Blocks/Barriers will appear (obviously not with this exact design, this is just an example): 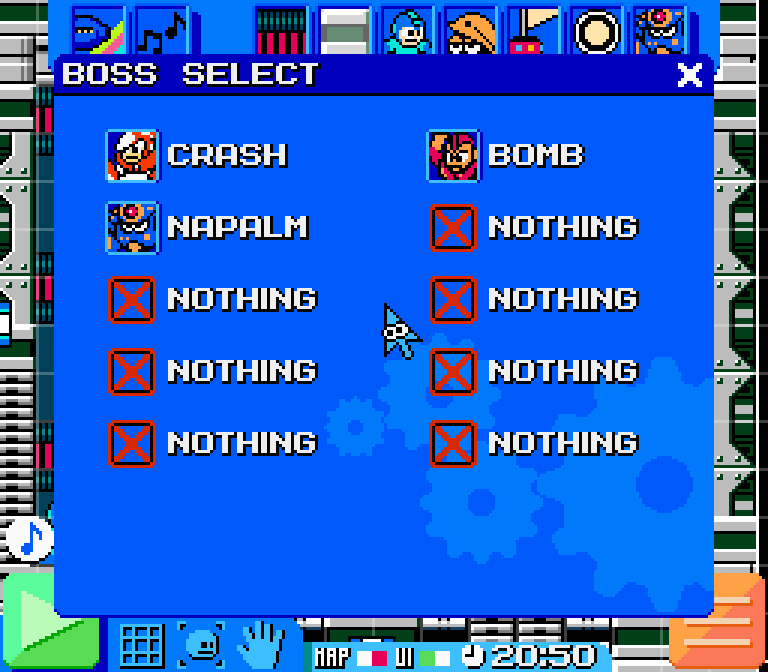 In the menu, the player would be able to select between each boss in the stage (I only included ten slots, there would probably be more pages in-game or something). When a specific boss is selected, their projectiles (or in some cases, only specific attacks like with Charge Man) will be able to break the block. In-game they would look similar to their player weapon counterparts, but with a boss icon (as in the editor icons, not the mugshots) instead of the weapon icon, and the boss' color scheme instead of the weapon's.
They would work as you'd expect in-game: when a certain projectile from a boss touches the block, if the latter is set to that boss, the block will break, just like with Weapon Blocks/Barriers.

3) Difficulty:
I'd say maybe 6/10 for the block itself, but apparently UI programming is pretty hard, so in general maybe close to 10/10?

4) Other:
Obviously, since bosses would have their own breakable block, it would make sense that Weapon Blocks/Barriers would then be exclusively broken by the player. Ideally, the new blocks would be different assets to the original Weapon Blocks and Barriers, so that no old levels are broken (this could seem like a bit exaggerated to at least a few users out there, but this is the same treatment checkpoints and teleporters got, because of how many levels used them).
But, obviously, blocks that can be broken by the player and bosses wouldn't stop being a useful feature. So, I suggest that they're kept in the editor, but under the name "Generic Block/Barrier". They could have something like a cracked pattern to differentiate them from Weapon Blocks and show that they are "weaker" barriers that can be broken by any corresponding projectile.
profile pic is an improved version of my hose man mugshot made by MP64/terra (the one i'm using is his version)
Top