Why Rebound Striker Deserves a Shot

Why Rebound Striker Deserves a Shot

This thread is to explain why Rebound Striker from MM10 is not a redundant weapon vs other Ball projectile weapons already in MMM, but useful and unique in it's own right.

I too at one time looked at Rebound Striker with indifference. After careful examination I feel it's a weapon worthy of inclusion in MMM. This thread is done in hope that the Devs see Rebound Striker as worthy as well. 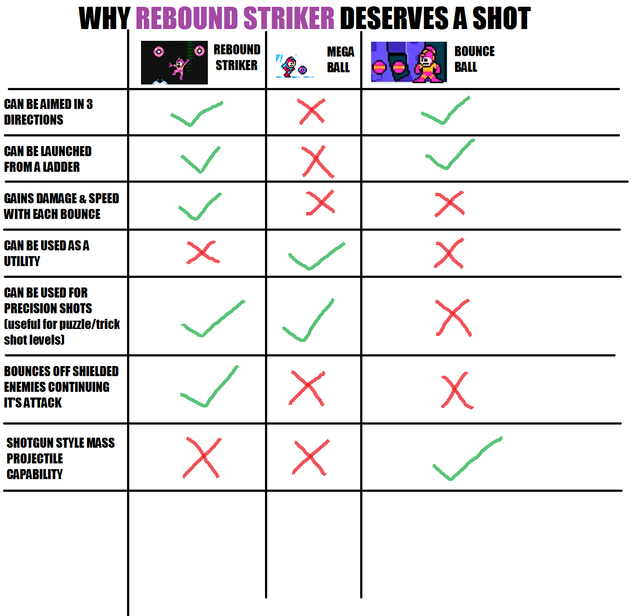 If Bounce Ball ever has the added attribute of being able to interact with it's own projectiles as mentioned here, then that would be one more additional original trait separating the three Ball based weapons listed here.

I mentioned before how there is a tendency to exclude at least one weapon from each Mega Man game, I'd hate to see Rebound Striker get cut. I created a thread with a suggestion to get around this, proposing that Pharaoh Wave from an official Capcom produced Mega Man arcade game substitute for MM10 Solar Blaze.

Cutting at least one weapon from each game isn't a written rule or guaranteed , just something I've noticed in the pattern of development.

Regardless of the results of this I just want to thank Wrecking and his Dev team for taking the time to hear me out.

My name is D-Man, and I approve of this message.

This got my vote.
Levels:
Banzai Woman

Avatar from KFCMans Adventure.
Not really on the forums a lot now a days. I'm mostly on discord now.
Top

To view a weapon for what it is we need to look beyond it's superficial quality (theme or what it looks like), and view it's attributes as a weapon.

If we remove the "ball" theme from each of these weapons we can see they all have different traits that allow them to be used in different ways. Sure they share some properties like many other weapons in the roster do, but there are multiple nuances which separate them.

Take for example: if a maker wanted to create a puzzle level that required precision shots. One screen has a pit of spikes and the player is walking on Weapon Blocks that prevent them from falling to their death. A shot requires bouncing a ball off a surface to hit a certain Weapon Block at an angle to allow safe passage.

Bounce Ball...would mean certain doom due to it's nature as a shotgun style room clearing weapon. It's not intended for precision shots because it's projectiles go everywhere.

Mega Ball...If the player is actually walking on the Weapon Blocks this weapon couldn't even be used without causing death.

Rebound Striker would offer multiple variations and angles due to it's ability to be fired 3 ways, fired off ladders, fired while falling, or even bounced off the shield of a Sniper Joe to make a precision based shot.

Users browsing this forum: No registered users and 8 guests