by Takatsuki
Since we now have 3 weapons that didn't originate in a Mega Man game, I was thinking that we could eventually have more down the line. So... I did a little brainstorming and came up with a few weapons from other games that might be cool in Mega Maker.

Name: Fire Flower
Short Name: Fire F.
Origin: Super Mario Bros.
Graphics: http://i.imgur.com/EkPKhCm.png
Description: Small fireballs that bounce on the ground.
Notes: Yes, I know those are the regular Mario graphics from SMB1 and not the Fire Flower graphics... but it looks weird to use the Fire Flower color scheme.

Name: Cross Boomerang
Short Name: C. Boomerang
Origin: Castlevania
Graphics: http://i.imgur.com/ekdUqDz.png
Description: A cross-shaped projectile that will return back the direction it came. Only travels horizontally, so it will not necessarily come back to Mega Man like Quick Boomerang, Ring Boomerang, etc. Most effective if you hit the opponent with the farthest point of the projectile's distance, as it will hit multiple times!

Name: Poke Ball
Short Name: Poke B.
Origin: Pokemon
Graphics: http://i.imgur.com/srTv2J6.png
Description: Throws a Poke Ball, which opens up into a random Pokemon (out of maybe 5-10?), which will then attack enemies on screen in different ways depending on which Pokemon is produced from the ball. You can only have 1 Pokemon on screen at a time, so it's a risky weapon! If you're lucky, you may get a powerful Pokemon like Mewtwo that can instantly defeat all enemies on screen (except maybe bosses) or you may get a Magikarp that flops around for a little while uselessly...

I'll post more if I think of any others.

by CoreFlare
Allow me to suggest some things, including a tweak.

Name: Poke Ball
Short Name: P.BALL
Origin: Pokemon
Description: Throws a Poke Ball, this pokeball can be used to capture a non boss enemy and store them for later use. It can then be thrown back out again as a friendly. The bigger the enemy, the more weapon energy it uses. If no enemy is captured and none was hit it will randomly throw out a met, telly or nothing.

Name: Little Gun
Short Name: L.GUN
Origin: I wanna be the guy
Description: Makes megaman smaller and do less damage, but also gives him a cape and a double jump.

Name: Beat Step
Short Name: B.STEP
Origin: Crypt of the Necrodancer
Description: Acts similar to the Flash Stopper but instead of freezing them it highly damages and damages them overtime and forces them to move and attack to the beat of the current music playing. But this effect also applies to you.

Name: Real Knife
Short Name: R.KNIFE
Origin: Undertale
Description: A powerful attack that can be timed to do massive damage to opponents. The weapon energy would be empty and it would use your health instead. You hold it down and the weapon energy will slowly charge up, you can then release to unleash a powerful attack with a piercing projectile that's more powerful depending on how much you hold it down. The problem is this uses your life energy like Z-Prototype from the Megaman Unlimited game.

Name: Proto Swap
Short Name: P.SWAP
Origin: Protoman from megaman
Description: Spawns a Protoman where Megaman is standing, tap the fire button to shoot and hold down to swap between Megaman and Protoman. This could be used for some very interesting puzzle levels.

by MTZPyra
Weapon Name: Rope (Nado is 4 letter weapon, Rope can be same)
Origin: https://www.megapain.smackjeeves.com/co ... r-new-pet/
What it does: Captures a small Mega Man enemy to use as your pet that doesn't really hate you but doesn't like you either. And can be used as a lasso or grapling hook just to make it more interesting and more useful.

by Pika Luigi
Weapon Name: Hook Shot
Short Name: H. Shot
Origin: The Legend of Zelda
Weapon Description: This Weapon can be aimed up, left, right, and diagonally. When you use it on enemies with shields, it pulls of their shield. It can be used on any ground pieces to pull you toward them.

by Snessy the duck
Weapon name: Wheel
Game of origin: Kirby's Adventure
Description: Mega Man turns into a ball and continues rolling forward, damaging everything in his path, until the attack button is released or hitting a wall (Which will cause him to recieve knockback, but no damage). You can also turn, but it has a slight delay (Just like in the original game). Mega Man is also unable to jump. Uses 4 weapon bars per use.

Weapon name: Master Sword
Game of origin: Legend Of Zelda
Description: Downward thrust ****(for those who knows about ExplodingRabbit) with no bounce. Poking and projectile exploding in X shape on full health. Low energy consumption on every attack.

Weapon name: Arrow Gas
Game of origin: Darkwing Duck
Description: Fires up to 3 arrows, that are stuck in the wall. Can hang on arrows or stay on them, but they doesn't stay for too long. Arrows nonetheless are also damaging and flying with speed lower than regular shots. Medium energy consumption.

) Throws big projectile in short arc, after it drops on ground splits in 2 small fast projectiles travelling in opposite directions on the ground(doesn't climbs obstacles). Medium energy consumption. 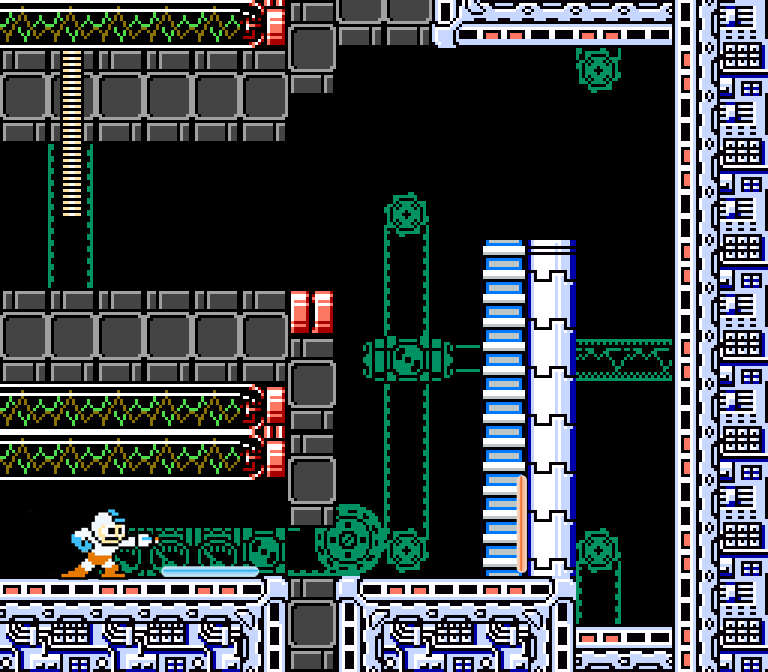 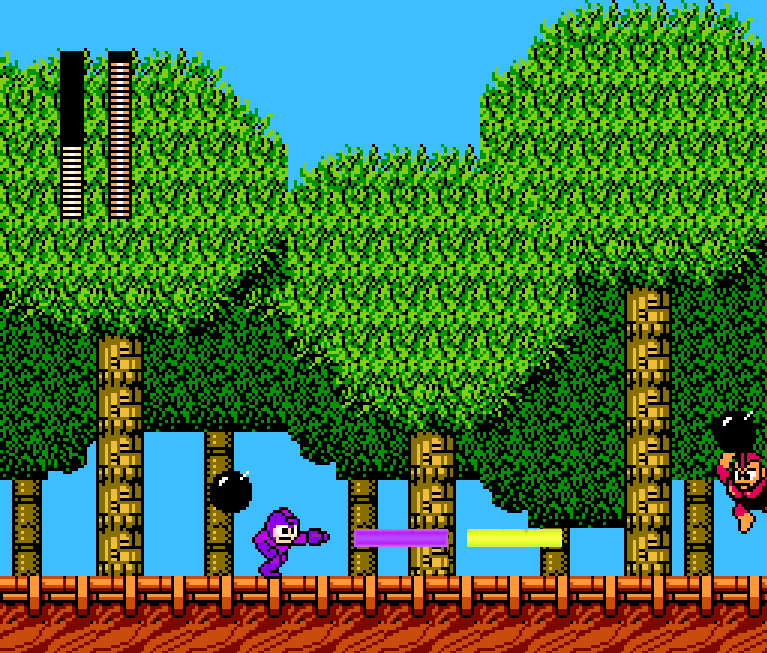 Weapon:Tanooki Suit
Short Name:T.Suit
Weapon Origins:Super Mario Bros 3
Description:Mega man turns into a stone statue, enemies and shots go through it without doing any damage
the meter of the weapon only low when megaman is turned into statue

Based off of the technique "Multi Form" or Shishin no Ken" used by Tien Shinhan in the Dragon Ball series. And its ONLY a coincidence that Copy Vision (From Mega Man & Bass) is similar to this technique. Copy Vision does not have physics, cannot move, and it's holographic.

Consumption Rate: Takes away 1/7 of Mega Man's Weapon Energy Meter every time you create the copy, therefore can only be used 4 times.

by splunkers
How about Geno Whirl short name G.Whirl. A yellow projectile that is thrown across the screen at a 45* angle. The projectile is fast yet costly as it can only be used 6 times before empty. It's damage is immense killing all enemies in it's path in 1 hit even bosses unless immune or resistant. It is also a charge weapon requiring it to be charged before launching. the animation would be like that of throwing a frisbee. the color scheme would be that of Geno himself dark or navy blue amenities with a wooden brown core.

Portal Gun would add of ton of great new options for Mega Man Maker in map design and gameplay (thumbs up).

by D-Man
The ReXelections from Mighty No. 9 can be easily adapted into Mega Man weapons. And, since there is no Xel system, they can be used to directly destroy enemies instead of setting them up for a dash-attack. If you're not familiar with them:

ReXelection: Pyrogen - Fire Explosion
A chargeable fire weapon like Atomic Fire and Magma Bazooka, it instead creates a circle of flame around the user, and can be charged up to three levels, increasing its radius and damage. Charging too much burns out the user, and they will be unable to move for a short time.

ReXelection: Cryosphere - Frozen Liquid
An ice-based projectile with limited range is shot in an arc, slowing and dealing damage over time to enemies it contacts. When their health is depleted, they are frozen, and can be shattered by dashing into them.

ReXelection: Dynatron - Thunder Seed
Fires 4 tags in a spread that stick to enemies and solid surfaces. Once stuck, they discharge electricity to their targets, and enemies that get caught in the path of the electricity can take damage as well. The signal can be lost if the target is too far/blocked by a wall.

ReXelection: Seismic - Strong Charge
Transforms the user into a treaded vehicle, allowing them to travel faster, run over enemies, and do small jumps on top of them. Holding the jump button lets you bounce further, and your position can be changed in midair. If it hits a wall, the user recoils off of it.

ReXelection: Battalion - Remote Cannon
Shoots a missile forward that can be attached to and detonated on enemies and surfaces. Has a rather large explosion radius, but is otherwise a hybrid of Drill Bomb/Crash Bomber/Remote Mine. Could destroy certain walls.

ReXelection: Aviator - Gyro Boomerang
Allows the user to hold a copter blade over their head, which increases jump height, lowers fall speed, and can destroy some projectiles. When released, it follows a zig-zag pattern forward, and can be called back prematurely, unlike other boomerangs.

ReXelection: Brandish - Blade Techniques
Chargeable melee weapon that, when uncharged, lets the user do quick sword strokes (this did not consume ammo). Charging will unleash a spinning sword attack that can be manuvered with the directional buttons, and can also do a falling midair slash with down input. Can nullify some projectiles, but there is also some delay after using the charged attacks.

ReXelection: Countershade - Reflect Shoot
A hybrid between a reflective and homing weapon, it fires a bullet that bounces off solid surfaces and enemies, but can also seek the nearest enemy once it rebounds. Up to three bullet can be on screen.

Some of these could use some improvements. There's also RAY's Variation Codes, but that could be discussed another day.
All times are UTC
Page 1 of 1
Powered by phpBB® Forum Software © phpBB Limited
https://www.phpbb.com/