What?
Buses and trucks that were the gimmick of Nitro Man's stage. Ride on top of them as they drive, or freeze/destroy them with Chill Spike.

How?
Transports would be more of a Level Object than an enemy, since it is immune to most weaponry and can be stood on. They would take the form of a spawner that, when on screen, will create vehicles that appear from the right of the screen if set to travel left, and vice versa. You can set the frequency at which they appear (1-3, with a higher number meaning they appear more often), as well as their speed (1-3, with 3 being Hard Mode's speed). They would be affected by gravity, and can cross over 2-tile (buses) or 3-tile gaps (trucks). They can ride on any tiles, spikes, or objects with solid collision.
Transports can only be destroyed by hitting the player from the front, or driving into a solid tile/object. All enemies will be destroyed if they are run over by Transports, and this will not stop them. All ice-based weapons should be able to freeze them. C. Shot's block, as well as O. Slider's ground slick and D. Wrap's landmines should also be able to defeat them. There's also two other objects to go along with them:

Traffic Sign
Red, flashing signs that light up into blue arrows before a Transport appears, serving as a visual warning. They would be non-solid tiles (like shadows).

Stop Lights
Solid, 1 tile objects that, when hit with any weapon, will prevent any Transport spawners from creating new vehicles. After a few seconds, they deactivate, and during their duration, they will deflect all weaponry.

Why?
Robotic Transports can serve as a faster variant of moving platform that can also double as an enemy. Finally, they have unique interactions with certain weapons, as described earlier.

Difficulty?
Medium-Hard, as it has many behaviors and interactions with weapons/objects. Also, the Transports need the Stop Lights and Traffic Signs to function smoothly, so all the parts need to be together. 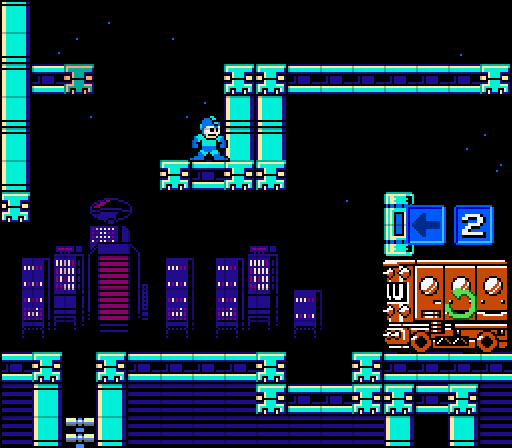 You left me wanting to watch a mega engine video.
Top

Sorry that there's a lot to read, but the Nitro Man gimmick is one big system, and I need to outline each part so that others can understand it.

Make a gif or a video to show us how could work them.
Top
Post Reply
5 posts • Page 1 of 1