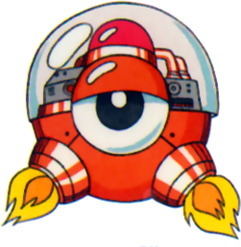 What?
Perhaps the most underutilized thing to ever come out of this series, the Rounder was an enemy that appeared in one screen before the end of Dark Man Stage 1. It flies towards the player and orbits them, interfering with their attacks. Disappears if you wait around long enough.

How?
Rounders are 1x1 enemies that would be placed individually. Upon spawning, they will seek the player out and orbit around them. They should not fly away automatically, and the only way to get rid of them is to destroy them or go through a screen transition. Up to 3 Rounders can be orbiting around the player at once, and if another one appears while this cap is reached, it will simply fly towards the player and off the screen.

Why?
Rounders can serve as a more flexible way to block weapon attacks than null Weapon Blocks/Time Bombs, as they follow the player wherever they go and are destructible. While harmless on their own, their potential comes from being paired with more active enemies. You may even put them inside a boss's arena!

Other
A different colored variant that is immune to all weaponry can be created. It can only be removed via screen transition.

Good idea. A spawner for them would be useful as well. I hope this happens.
Top