Does needle man have a mouth and nose?

Does needle man have a mouth and nose?

I was on vacation and i was showing my older brother needle man for a complex reason i wont go into but the point is that he assumed that he had a mouth and nose and i asked a bunch of people and they agreed with him... so does he? 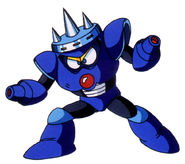 In this artwork it seems like he has a red nose and a large white smile underneath, but in the sprite the "nose" is where the "mouth" should be, so whats the deal?

Well lets go over the evidence supporting my claim, which is that he doesn't have a nose.

1: he is part of the Airman model, and Airman doesn't have a face other then eyes.

2: Lots of other Robot Masters have the "Nose" yet also have clearly defined noses

3: Artwork from MM&B have the "Teeth" look square and are also more blue.

4: the sprite shows the "Nose" where the "mouth" should be.

5: in the RS cartoon he doesn't move his "Mouth" when he talks, same goes for his super adventure rockman appearance.

Now lets look at the evidence for my brothers side, Which is that it is a mouth and nose.

1: It looks A LOT like a mouth and nose, and its strange that the artist would've made it look like that if it wasn't intensional.

He says that this one claim is all the evidence he needs.


So who do you think is right? Explain your opinion.
FEAR MY FLUFF OF DOOM

Re: Does needle man have a mouth and nose?

That red "Nose" Is what I'm assuming is some kind of power core or something, though that can't be confirmed. A fairly decent chunk of Wily's RM series have these - Metal Man, Enker, Zero, etc.

The "mouth" and "Teeth" are just the unarmored waist bit & what's most likely some kind of vent, respectively. The light / unarmored bit is really common in the series with more humanoid RMs, with the vent being seen with heavier-duty bots like Punk and Dark Man.

TlDr you're probably right that it's just a majority rehash of Air Man's chassis minus the central fan.
Knight needs caffeine badly.
Top

Re: Does needle man have a mouth and nose?