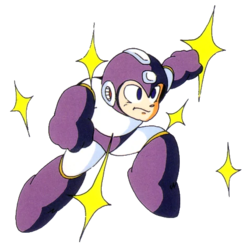 Obtained from Flash Man, the Time Stopper enables the user to freeze time for everything but themselves. While time is stopped, twinkling stars are overlaid across the screen. However, this comes at the cost of continuously draining energy at a rate of 4 units per second. While active, the user cannot attack, switch weapons, or deactivate it. Oddly, a throwing animation is used, so it will hold the user in place briefly if activated on the ground. Only bosses weak to Time Stopper will take damage from it, at a rate of 2 units per second. Due to all this, the effectiveness of this weapon largely hinges on where and when it's used.

In MMM, the ability to deactivate Time Stopper was added, which makes it function similarly to an X series weapon based off of it, the Dark Hold. Weapon Blocks marked with Time Stopper are the only thing this weapon can destroy. Key Doors will still open while time is frozen. Beyond this, there are no significant changes in how it affects things. Bosses will be frozen only if it's a secondary or primary weakness, and they will take damage as well is it's the latter.

Although there is not much to say about it, Time Stopper still holds its own as an alternate method of stopping time. Being able to deactivate and switch out of it makes it less risky to use, and compared to the similar Flash Stopper, it's inability to fire shots can aid makers who don't want players to cheese frozen enemy formations.

The last gif should work now, after being recorded with external software.

Appreciate those gif examples you do along with the analysis. Your ideas to showcase are excellent.
My Hopes and Dreams:
Wily Tower Weapon Selection
PU Moving Blocks + Spawners
POWER-UPS Without Shops
Expanded MM7 Junk Machine
Mercury Blocks
Top

Excellent visual showcase of puzzles that can be used with the weapon.
Top
Post Reply
4 posts • Page 1 of 1