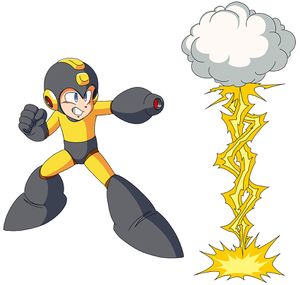 Obtained from Sheep Man, the Thunder Wool allows the player to create up to two clouds that rise up in a slow arc before summoning lightning from beneath them. The arc spans about 3 tiles forward, and 7 tiles upward. It will stop moving forward/upward if it touches a wall/ceiling, which can be used to set it up more reliably. After a 1-second delay, a thunder bolt crashes down from beneath it, dealing up to two hits of 4 damage each through its 2-second duration. The lightning pierces shields, passes through Count Bombs, and can destroy projectiles as well. The cloud itself deals no damage during this, but it cannot be destroyed either. The bolt reaches down 12 tiles from its point of activation, and if it breaks a destructible object (such as Chill Blocks), it will not reach further down. Bosses can take more than two hits from the thunder bolt, due to the way their invincibility frames work.

This weapon's critical flaws come from the fact that if the cloud portion of the attack touches an enemy before reaching the end of its fuse, only 1 unit of damage will be dealt. The cloud can be destroyed before it activates as well. While the thunder bolt has great vertical range, its horizontal range is nonexistant, which can lead to close misses if aimed at the wrong place/time. These flaws, combined with its high ammo consumption makes the Thunder Wool an unwieldy weapon in most circumstances.

In MMM, Thunder Wool returns along with it's Robot Master, bringing several changes:

The cloud now passes through enemies, is faster, and upon striking solid ground sends lightning out 2 tiles on both sides, giving it better horizontal range. The bolt is now capable of hitting up to 6 times through its duration, and if the terrain beneath it were to disappear suddenly, the bolt will continue downward. The Wool's default arc spans 4.5 tiles forward and 7.5 tiles upward, and can be adjusted by holding up/down while firing. The former will cause the cloud to travel 2 tiles forward before rising, and the latter will make it go 6.5 tiles forward.

Some useful traits of the original have been removed, mainly the ability to erase non-destructible enemy shots, as well as the bolt's ability to pass through Count Bombs. The cloud can be deflected by armored enemies even after sending lightning down, potentially canceling the attack. If the cloud is moved offscreen, the bolt will disappear too, and firing the Wool too close to a wall will cause it to get lodged within it. Finally, it cannot disable Fire Met Spawners, despite being an electric weapon.

In conclusion, while the changes made to Thunder Wool allow it to be comfortably used in more combat situations, the features removed from it cut into its creative potential somewhat.
Last edited by D-Man on Tue Apr 14, 2020 1:40 pm, edited 6 times in total.

Probably a necropost, but in just 2 days, I'll be able to finally get a in-depth look at MMM's Thunder Wool, thus allowing me to finish this analysis. Also, I'm not sure if anyone noticed, but I replaced the gifs after finding out that T. Wool worked better on Hard Mode.

Yeah. I'm looking forward to his updated analysis on this, always a good read.

It's done. Check it out.